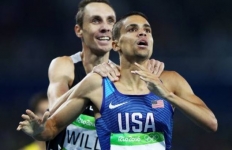 There might be no Nick Willis, but Whanganui's Sir Peter Snell international track meeting has gone arguably one better with the presence of Olympic 1500m champion Matthew Centrowitz for the blue riband Mile.

And the American is setting his sights on breaking the renowned Cooks Gardens track Mile record when he lines up for his only New Zealand appearance of the summer at the meet on Wednesday, March 21.

The 2016 Rio Olympic winner will be joined in the prestigious Mile race by five Australian sub-4 minute runners and at least one New Zealander who has cracked the well-known mark.

There have been 63 sub-4 Mile peformances run by 41 different runners on the Cooks Gardens track since Peter Snell set his world record of 3:54.4 in 1962.

Centrowitz, who missed most of last season because of leg injuries, also plans to race in Australia during his visit Down Under, which replaces his usual campaign on the North American indoor circuit.