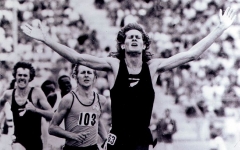 Statue of the first man to record a sub-3:50 Mile to be cast by sculptor Joanne Sullivan

A bronze statue of New Zealand athletics legend Sir John Walker is to be placed in Manurewa town center in Auckland.

Walker, who initially ran for the Manurew Harriers club, won the 1500m gold medal at the 1976 Montreal Olympics.

It was the first time that the someone had gone under the 3 minute, 50 second mark.