In the men’s race, Johnny Gregorek, 6th at last weekend’s USA 1500m Championship, paced the first half of the race with Kieran Lumb of Canada later taking the lead before Prakel made his move in the final blocks on the slight downhill, point-to-point course to hit the tape unchallenged. Lumb finished runner-up, holding off Colton Johnsen, both timed in 3:54. Overall, 8 men went sub-4 minutes.

"I was gunning for the record… (Yakima's) definitely a harder course than people think," Prakel post-race told the Yakima Herald-Republic. "Even though the first quarter mile is slightly downhill it still takes a pretty long grind after you hit 800. It's tough seeing the finish line the whole time because you think it's close but it's not."

The women’s race was a debut road Mile thriller between Ella Donaghu and Katie Camarena.

Donaghu, an Oregon high school record-setter and Stanford graduate, led from the gun with Camarena close behind. In the final strides down Yakima Avenue, Donaghu, 24, had just enough to edge Camarena, 4:31.64 to 4:31.79, both 4:32 official time, and earning $5000 and $3000, respectively. Jenn Randall, seventh last year, finished third in 4:35.

“I found myself in the front at the start, which wasn’t really the plan,” Donaghu recounted to the Yakima Herald-Republic. “But I came here to run a hard race and I didn’t want to back off. Katie did a really good job pushing at the end. The finish line almost looks like a mirage, not coming any closer, but that’s just part of running a road Mile for the first time. It was fun.”

All event proceeds will be donated to the YWCA Yakima that touches the lives of thousands of people here in the valley through its 24-hour domestic violence emergency shelter, crisis hotline, affordable housing aid, legal advocacy and more. 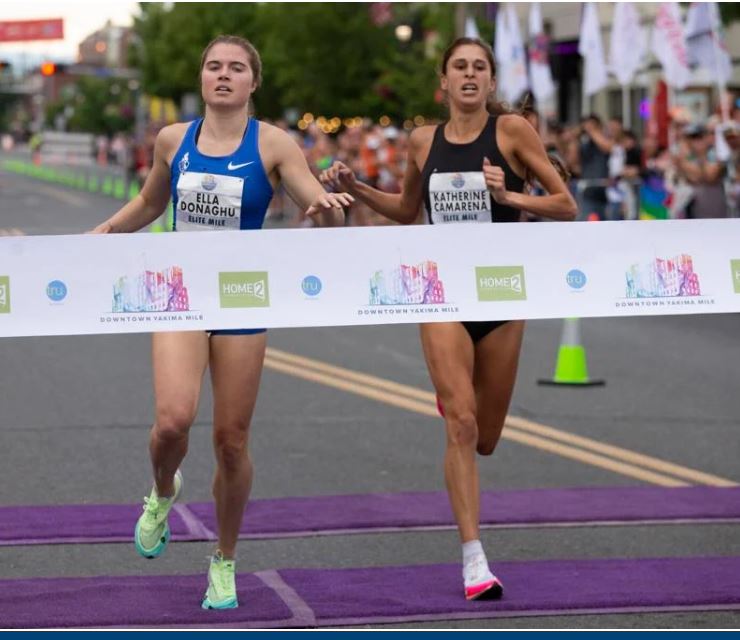