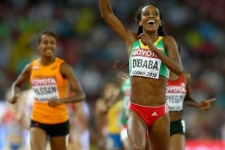 U.S. champion and 2011 world champion Jenny Simpson cannot be ruled out as she is a fierce racer and has a fine record at major championships.

With six women having run faster than four minutes in 2017, the 1500m could prove to be one of the most competitive events of the championships.

Although far from clear cut, perhaps the three favourites come in the form of Olympic champion Faith Kipyegon of Kenya, world champion and world record-holder Genzebe Dibaba and the Netherlands' world indoor champion Sifan Hassan, who took bronze two years ago in Beijing.

The trio are the top three on the world list, all with sub-3:58 clockings in 2017 – and all have proven themselves as prolific major championship racers. Kipyegon and Hassan have won two IAAF Diamond League meetings each this season – the former in Shanghai and Eugene and the latter in Rome and Paris – while Dibaba, who may not be in 3:50.07 world record form of two years ago, has clocked 3:57.82 en route to her 4:16.05 Mile victory at the IAAF Diamond League meeting in Lausanne last month.

Despite only boasting a season's best of 4:00.35 – in part due to racing sparingly early season due to a foot injury – Britain's Laura Muir is another medal contender. After breaking Kelly Holmes' British record with 3:55.22 in Paris last year, the Scot claimed four other national records from 1000m to 5000m in the space of just six months, before completing her 2017 indoor season with double gold over 1500m and 3000m at the European Indoor Championships. She will be doubling up with the 5000m in London, but the 1500m comes first and does not overlap with the longer event.