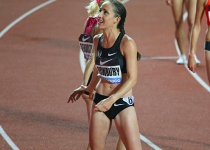 Aided by a tremendous rabbiting effort by Chanelle Price, every athlete in Friday's Diamond League race set a best of some kind, whether it was a season's best, personal record or in the case of Ethiopia's Genzebe Dibaba, a stunning world record.

Price (Easton, PA) perfectly paced Dibaba, European champion Sifan Hassan, Rowbury and the rest of the field with an opening lap of 1:00.31, and paced the lead pack through 800 meters in 2:04.52 before leaving it to Dibaba for the final two laps.

Rowbury and compatriot Jenny Simpson pushed each other throughout the race, but as Dibaba charged towards the line for the world record in 3:50.07, it was Rowbury who emerged as the top American. The two-time 2015 USA Indoor champion stormed to the finish to come away with a third-place performance of 3:56.29. Simpson (Boulder, CO) crossed fourth in a season's best 3:57.30.

For full results from the Diamond League meeting in Monaco, go to: IAAF.org