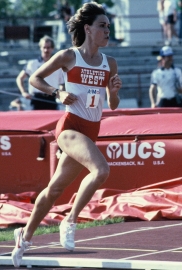 Over the course of her decorated career, Slaney set 36 national records and 17 official & unofficial world records from 800 to 10,000 meters and won 11 USA titles.

FUN FACT: Mary Decker won the 1982 Sullivan Award as the “the outstanding amateur athlete in the United States”; the only women’s Miler to do so. That year, she set 7 world records!

FUN FACT II: Mary is tied with Genzebe Dibaba of Ethiopia with the fastest track Mile time for a given month with two each, the most by any female athlete.

Landing on her chest and knees [Zaytseva] and sliding across the finish with her knees over the rail, as Decker (4:00.90) had captured her second gold in dramatic fashion.

For an arena that bills itself as “the greatest stadium in the world”, the Los Angeles Coliseum is badly in need of a facelift. Large cracks caused by...

For the past three years, Slaney has competed in the World Championships of Elliptical Cycling at Palomar Mountain near San Diego, improving her time each year. She’ll be entered again in this year’s competition on Oct. 17.

The world still moves quickly for...

The latest ESPN Nine for IX documentary takes a look at one of sports most infamous moments, the Mary Decker - Zola Budd collision at the 1984 Olympic Games at 3000 meters; premiers on ESPN on August 13; directed by former world class runner Shola Lynch, winner of the 1984 Millrose Games Girls'...

Many remember Zola Budd as the barefoot prodigy who broke world records, became a symbol of South Africa's oppression, and was blamed for Mary Decker's Olympic nightmare, but her story has more heartbreak, more hard-fought redemption and considerably more weirdness than the legend.

But Slaney, America's greatest female middle-distance runner, can't run. Not like she...

When it came up again, there was no expression there, nothing but running animal. She held her form.

Morocco's Said Aouita came flailing into the stretch of the 1500 meters in West Berlin's Olympic Stadium last Friday night looking as if his teeth were going...

She Runs and We Are Lifted

Mary Decker is moved by a competitive yearning that rises from so deep in her character that it connects with her will to be loved.

What a glorious conceit it is to pick a Sportsman of the Year. Can anyone really study the ranks of different champions and...

Hands Across the Chasm

With track outcast Sydney Maree watching from the stands, Eamonn Coghlan ran the fastest Mile of the outdoor season and Mary Decker established an American record

To stir interest in last Saturday's Brooks Meet of Champions at Franklin Field in...