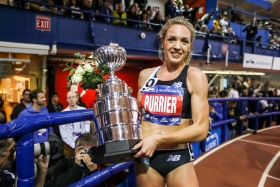 Elinor "Elle" St. Pierre (née Purrier) won the 2022 Wanamaker Mile to defend her crown, running 4:19.30, also the fastest Mile in the month of January ever by a woman, and in February, she won the USA Indoor 3000m title in 8:41.53. In March at the World Indoor Championships in Belgrade, she won the silver medal in the 3000 meters, clocking 8:42.04, for her first global medal.

In 2019, the rising U.S. star finished third in the USA 5000m Championship to qualify for her first Team USA berth at the World Championships in Doha, and in September at the New Balance 5th Avenue Mile, she was just nipped by winner Jenny Simpson, clocking a personal best 4:16.2. In February, Elinor also set her then track Mile PR of 4:24.88 at the New Balance Indoor GP in Boston.

After graduating from the University of New Hampshire and turning pro, at the 2018 USA Outdoor Championships in late June, she finished sixth in the 1500 meters, running 4:09.30.

At the University of New Hampshire, Purrier was an 11-time All-American and studied nutrition.

FUN FACT: Elinor grew up on her family's Vermont dairy farm, milking 30 cows each morning at 5:30, before going to school.

In the United States and beyond, the 1500 meter distance is a notoriously competitive event. And among the U.S. women, the depth of talent meant that the...

NEW YORK - Both the WHOOP Wanamaker Mile races lived up to their expectations Saturday afternoon during the 114th Millrose Games at The Armory’s New Balance Track & Field Center.

By Ryan Lamppa, Bring Back the Mile...

NEW YORK - The Armory Foundation has announced that WHOOP, the human performance company, will be the title sponsor of the 2022 WHOOP Wanamaker Mile in the upcoming 114th...

In the world of track & field, Elinor Purrier is known as the runner who was raised on a farm. She's hoping that...

A favorite, albeit shopworn, expression is "Hard work beats talent when talent doesn't work hard." It is a saying that can be witnessed and validated in many walks of...

Call it a long, loooong weekend. Or “there’s no place like home.” It’s the story of Mile star Elle Purrier’s spring at her family’s dairy farm in northern...

“She really shows you that no matter where you grow up you can achieve your dreams if you work for them."

RICHFORD — Elle Purrier, fresh from competition at the IAAF World Championships in Doha, Qatar, spoke to runners from MVU, Enosburg, Fairfax, and...

As Elle Purrier Heads to Worlds, the Hay is in the Barn

“She’s not scared of doing hard work. There’s no drama with her, you know? She’s like, ‘What are we doing today?’ You tell her what we’re doing. And she just does it."

It’s a lifestyle, so having all the factors come together to be able to stay in shape for a long time and stay healthy and do well is my ultimate goal.

The most decorated athlete in University of New Hampshire history transitioned smoothly into the...

After graduating in May as the most decorated athlete in University of New Hampshire history, Elinor Purrier turned pro by signing...

How a dairy farmer from Vermont became an NCAA Mile champ

UNH's Elinor Purrier says farming has taught her to be resilient. “It’s taught me life isn’t a piece of cake, it’s going to throw a thousand challenges at you at once.’’

Look at the results of the Mile finals at the 2018 NCAA Indoor Track & Field Championships and you’ll see that New Mexico’s Josh Kerr and New...