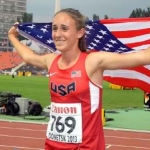 Just four years ago, Hickey watched Efraimson practice as an eighth-grader and knew the potential for greatness was there.

"I remember going up to my high school coach and I said, 'This girl is special,'" Hickey, a coach at Clark College who also works with runners at Camas (Wash.) High school, said. "I thought from the start, you never want to get too ahead of yourself, but I believed she had a legitimate shot of winning some state titles."

Efraimson's walls at home are lined with more than just state titles. She won a bronze medal at the 2013 World Youth Championships and dominated at the Nike Cross Nationals in December. In March, she was named the 2013-14 Gatorade National Girls Cross Country Runner of the Year. Her 4:07.05 in New York was the second-fastest 1500m time ever by a high schooler.

Her time is just three seconds behind Mary Cain's American junior record of 4:04.62. Both were seen signing autographs and taking pictures with fans outside Icahn Stadium after the adidas Grand Prix, and the two are quickly popularizing running for the next generation.