The Roger Bannister Effect: The Myth of the Psychological Breakthrough 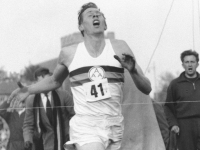 The stagnation was attributed to the war and the breakthrough was a return to sport along the modernization of training.

By The Science of Running

The story goes that Roger Bannister crushed the 4 minute Mile mark, and allowed runners to dream of the impossible. No longer held back by this psychological barrier, swarms of runners went under the barrier. It’s touted as a story of humans holding themselves back, and what can occur if we release the shackles on our mind. How many crushed through the barrier after Bannister? Well, if you go to the wrong well-meaning inspirational site, they might tell you twenty-four within a year.

The reality is less dramatic.

Only John Landy broke four the rest of the 1954 season, and in 1955, three more joined Bannister and Landy, all coming from the same race. Within 2.5 years, there were 10 runners sub-4, so an improvement, but not a flood of individuals. But it was still a breakthrough, right? He still showed people what was possible. I mean he broke a world record that was on the books for 9 years! And after he broke it, the mile was taken to another level. Herb Elliott dropped the record down to 3:54.5 within 4 years! Surely, a psychological breakthrough was the key!

It makes for a compelling narrative, one that is thrown around at success seminars left and right, meant to inspire you to let go of your psychological barriers. But is it true, did Bannister usher in a new era?