The summit chase of an organization Miler: Jim Beatty 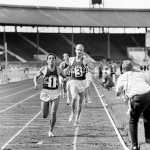 Getting to the top these days is not so much a climb for mountaineers as it is an exercise in pyramidal logistics. A large expedition, growing smaller as it moves base camps higher, heaves and strains to place, ultimately, one man on the peak.

For almost a year now the same technique, with necessary variations, has been used by the Los Angeles Track Club. Entering as a team of four in the same race, say the Mile, they take turns pacing each other through the first three-quarters, then look to one man for a record. The man in every case is Jim Beatty, and the record, twice during the past fortnight, has been Peter Snell's world Mile standard, 3:54.4. In London and Helsinki, just three days apart, Beatty ran two magnificent Miles—the two fastest ever run by an American (U.S. outdoor records)—but at the end of both he was still searching for fulfillment. Even for an organization Miler, passing Snell was becoming as frustrating an experience as climbing Mount Everest.

The Los Angeles Track Club, coached by Mihaly Igloi, had gone to Europe frankly in search of records, but from the start a cloud seemed to attach itself to the party. Before the first race at 2000 meters in London, the heavens opened wide. Beatty, with Jim Grelle, Bob Seaman and the aging Laszlo Tabori, found himself splashing around in ankle-deep water. It was typical English fare, like fish & chips and tea. Doughty Yorkshire runner Derek Ibbotson squished to victory while the Americans, all except Seaman, earned themselves a scathing press by dropping out after two laps for fear of pulling muscles. "Inexcusably bad sporting manners," snorted the London Daily Herald's Peter Lorenzo.

It was also wet in Oslo, the next stop, but there, on a heavy track, despite several days of missed training, Beatty managed 3:39.4 for the 1500 meters, the best recorded time this year. At Avranches, France, where rain had saturated the track, too, Beatty next clocked 7:54.2 for 3000 meters. The time, 1.4 seconds short of Gordon Pirie's recognized world record, has been bettered by only three men.

Remarkable as these races had been, it was the Mile that Beatty and Igloi were interested in. Back in London on August 18, the rain finally held off. It was cloudy but warm and Beatty privately was beginning to talk of a "miracle Mile." Igloi, whose training methods are so mysterious that Seaman stopped writing down his workout schedule because it didn't make any sense to him, was as inscrutable as ever, but one sensed he was thinking of a record, too. "Any country I can make good runner," he explained to reporters. "Everybody said the American runner is lazy, don't work. Now the American distance runner is the best in the vorld." Only British track expert Norris McWhirter was doubtful. He firmly predicted 3:56. "Beyond that," he wrote, "you are delving into the realms of human possibilities."

When the Los Angeles team came to the starting line there were a few boos, the residue of bad feeling from before. It quickly drained away. The run was one of the finest ever seen, although Snell's record remained tantalizingly intact.

Igloi wanted a scorching 55-second first lap, a 1:56 half and a 2:55 three-quarter. What happened instead was that Seaman, who led at the first quarter as intended, clocked 57.9, and those three seconds were never made up. Grelle led the second lap, hitting the half in 1:58.3, and Beatty took over at the third, in 2:58.8. On the last part of the back-stretch Grelle moved in front again. Beatty shot around him at the finish of the turn and beat Grelle by two yards and two-tenths of a second in 3:56.5, an American record.

As if for a moment sand had stopped running through an hourglass, three other runners followed Beatty and Grelle under 4 minutes. An Englishman, Stan Taylor, came third and Bob Seaman fourth, both clocking 3:58. Another English athlete, Mike Berisford, was fifth in 3 minutes 59.2 seconds. Only the Dublin Mile in 1958, when Australian Herb Elliott set his world record of 3:54.5 and four other men cracked 4 minutes, can compare with it. Beatty's time, like his 1500 meter mark in Oslo and his 3000 meters at Avranches, set a new American record. "If somebody had jumped at the last lap," says Beatty, "it might have been different."