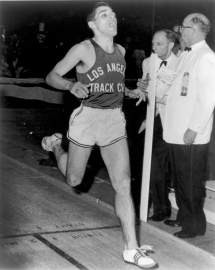 The 1962 Sullivan Award winner and University of North Carolina grad also held American records for 1500m and the Mile that he set four times (outdoors) as well as the world indoor Mile record twice.

FUN FACT: The local North Carolina newspapers called him "Little Jimmy Beatty", and later, he was known as Mr. Inside because he was the first man sub-4 minutes for the Mile indoors (Roger Bannister was Mr. Outside).

That last quarter Mile was run out of fear because I didn’t know what I had to negotiate.

Jim Beatty is the first person to run a sub-4:00 Mile indoors which he did on February 10, 1962 when he ran 3:58.9 at the Los Angeles Invitational. The trailblazer is also the first...

It takes three people to hold it up, like an anaconda, draped between them and unfurled...

Fifty years ago on February 10, a short middle-distance specialist from North Carolina stepped up on the boarded indoor track at the Los Angeles Sports Arena and made running history. Three minutes and 58 seconds after the starting gun had sounded, Jim Beatty became the first human ever to go...

The summit chase of an organization Miler: Jim Beatty

Getting to the top these days is not so much a climb for mountaineers as it is an exercise in pyramidal logistics. A large expedition,...

History on The Boards

The starter's gun in Los Angeles sends off Jim Beatty on the fastest indoor Mile ever run. The field from the pole: Tabori, Beatty, Grelle, Close, Martin