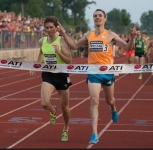 “I’m not normally a front-runner but we promised to get after it,” Willis said. “It’s an honor to have my name down as the fastest person who ever ran on Michigan soil; that’s got a cool ring to it.”

Willis, 31, was never far behind the front, pulling ahead in the final 800m and barely holding off Garrett Heath as they crossed the finish and collapsed on the track.

“Down the home straight, I had nothing left and I was just trying to reach the finish hoping nobody would pass,” Willis said. “I think he got pretty darn close in the end but thankfully I was able to hold him off. I was exhausted … but I was in the lead in front of my home crowd and I couldn't relinquish it.”