Winning the race against yourself 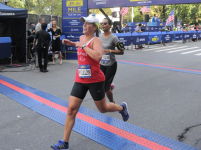 My time didn't set any records, or win me anything. But that's running. For most of us, we're running against ourselves - our whole selves: mind, body, doubts and all. And on that pretty fall day, I won.

By Jen A. Miller, The Philadelphia Inquirer

In the end, it's the glass in my foot that saved me.

As I wrote a few weeks ago, instead of spending my summer putting in long Miles to train for another fall marathon, I pulled back and prepared for what I hoped would be a fast Fifth Avenue Mile, run in New York City on Sept. 13.

I did this for a lot of reasons. I have eczema, which goes into hypermode when I run in the heat. I'd lost a lot of speed in shorter races when I switched to running marathons in 2011, and in that time slowly gained weight, in part because I thought that because I ran 15, 18, 20 Miles in a day, I could eat whatever I wanted. I bloated, and I hated the bloat. My last great race performance had been in the spring of 2013. I figured a mix of speed work and weight training would kick out those extra pounds, and maybe get me back into racing shape.