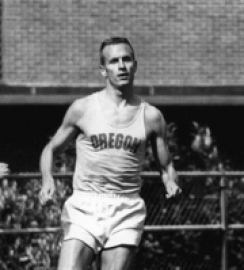 FUN FACT: Burleson was the first to receive a full track & field scholarship from legendary University of Oregon coach Bill Bowerman, and Burly rewarded Bowerman's faith in him with an undefeated streak in his three years of collegiate competition.

By Justin Much, Stayton Mail

Who better is there to ask about his favorite place to run than a world class runner?

Greatest running moment: That first sub-4 Mile on Hayward Field thanks to Ernie Cunliffe – that would be it.

Dyrol Burleson was a member of the 1960 and 1964 United States Olympic teams in the 1500 meters where he finished in sixth and fifth place, respectively. He won the 1960...

It all began with a magazine cover. As a 14-year old growing up in Cottage Grove, Dyrol Burleson saw a photo of Great Britain's Roger Bannister on the...

A Kansas Boy with a Man-Size Task

This week in Los Angeles, 135 athletes will be competing for 60 positions on the U.S. Olympic track & field team. Some of them—such as Dyrol Burleson, Bob Schul and Henry Carr—have already clinched a spot on the team, provided they are still in good shape, by virtue of their victories in the...

Two-time Olympian featured on two SI covers: "The Mile was really something back then."

As a precocious teenager growing up in Cottage Grove, Ore., in 1954, Dyrol Burleson set three goals: run a sub-4 minute Mile as Roger Bannister had in making history...