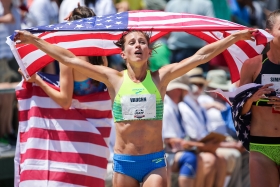 
Sara Vaughn, in her debut, won the 2021 California International Marathon, clocking a course record of 2:26:53. She is only the fourth U.S. woman to record a sub-4:30 track Mile and sub-2:30 marathon (also Francie Larrieu Smith, Molly Huddle and Jordan Hasay).

At the 2017 USA Outdoor Championships in Sacramento, she finished a surprising third in 4:07.85 to punch her Team USA ticket to London for the World Championships.

Vaughn won the 2014 Camel City Indoor Mile, clocking an event and North Carolina indoor state record of 4:35.07, and she finished runner-up in the inaugural BBTM Grand Prix Tour 2014. The NCAA All-American at the University of Colorado was third at the inaugural USA 1 Mile Road Championships in 2009.

FUN FACT: Husband Brent was also a national class runner, and together, they are raising three young daughters and a baby son.

When Sara Vaughn and her husband and coach, Brent, returned to their Boulder home Wednesday...

Darkness is descending and a chill...

“We had moments where we didn’t really have enough money to pay for food. It’s like 10 years of hard work after college going into that moment.”

BOULDER — Capturing major life events within the limited constraints of Twitter posts isn’t easy, but a pair over the...

Sara Vaughn Steals Our Hearts and the Internet Goes Wild

After a stunning USA Championships 1500m race, her friends and fans took to Twitter to celebrate her tenacity.

When the women’s 1500 meters was finishing on Saturday afternoon at the USA Outdoor Track & Field Championships in Sacramento, the television...

Sara Vaughn competes on a shoestring, but that didn’t keep her out of the World Indoor Track & Field