Bowerman Mile again draws the best of the Best 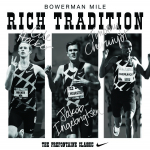 The Prefontaine Classic has churned out more sub-4 minute Mile performances than any other American meet, and the storied Bowerman Mile has played a pivotal role in building upon that legacy. This year’s lineup looks to continue the timeless tradition on Saturday, May 28. Six runners entered in this year’s field have run their personal best in the historic race, including the Olympic gold medalist Jakob Ingebrigtsen.

The 21-year-old already has a rich history of success in the Bowerman Mile. At the 2017 Pre Classic Ingebrigtsen became the youngest to ever break the 4 minute barrier, running 3:58.07 at the age of 16. One year later he would lower his time to 3:52.28 and come back again in 2019 with a 3:51.30. In last year’s race, Ingebrigtsen captured his first Bowerman Mile victory, running the fastest time ever on U.S. soil, 3:47.24. After breaking the Olympic record in Tokyo last summer and taking down the indoor 1500 meter world record earlier this year, it’s clear the Norwegian is ready to cement himself further in the record books.

The budding rivalry between Ingebrigtsen and Kenya’s Timothy Cheruiyot will add another chapter at the Pre Classic in 2022. After winning the Bowerman Mile and claiming gold at the World Championships in 2019, Cheruiyot took silver at the Olympic games last year. He would ultimately bounce back to beat the Norwegian in the Zurich Diamond League and claim the 2021 Diamond League title.

Oregon track & field alum Cole Hocker will be making his Pre Classic debut in this year’s Bowerman Mile. The Nike athlete shot to popularity last year after claiming three NCAA titles and finishing sixth in the 1500m final in Tokyo. He is also coming off a phenomenal indoor campaign where he won U.S. titles over 1500m and 3000m. His most notable performance came at the U.S. Olympic Team Trials, where he kicked down 2016 Olympic gold medalist Matthew Centrowitz in the home stretch to steal the victory. Centrowitz is also featured in this year’s Bowerman Mile field (scratched).

A notable addition to the lineup is high school senior Colin Sahlman. The Newbury Park standout became the 13th high school runner to break 4 minutes in the Mile, clocking 3:58.81 indoors in February. He is only the fourth prep athlete to go sub-4 indoors and the fifth fastest high schooler all-time over the distance. Pre Classic fans will have fond memories of the athlete atop the list, as Alan Webb’s 3:53.43 from the 2001 Bowerman Mile still stands as the mark to beat. We’ll see if Sahlman can channel some of the magic Webb experienced 11 years ago.

Americans Cooper Teare and Clayton Murphy will also be joining the field. Teare ran a solo a 3:53.24 split as a part of a 4xMile world best attempt at Hayward Field in April and finished fourth in the 5000m at the Olympic Trials last year. Murphy is a two-time Olympian and finished ninth in the 800m in Tokyo.

Abel Kipsang, who took 1500m bronze at the World Indoor Championships will also be running the Mile at the Pre Classic. The Kenyan athlete finished fourth in the Tokyo Olympics. He will be joined by fellow Kenyan Vincent Kibet Keter, the 2021 world junior champion at 1500m.

The Bowerman Mile will take place on Saturday, May 28 and is a Diamond Discipline. Experience the rich tradition and secure your seats at PreClassic.com.