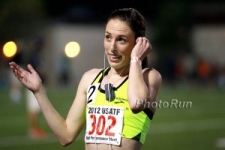 Gabriele Anderson, 26, was the fourth-place finisher in the 1500 meter run at the 2012 U.S. Olympic Trials in Eugene. On July 17 in Lignano, Italy she lowered her personal best to 4:04.84. Anderson is a survivor of two types of cancer—adenoid cystic carcinoma, which affects a gland that secretes saliva, and thyroid cancer (the thyroid was removed). She's a Team USA Minnesota member who ran at the University of Minnesota, where she was an NCAA runner-up in 2010. On Saturday night, Anderson was second to Brenda Martinez at the Falmouth Mile in Massachusetts in 4:27.94. A recent interview with her local Minnesota newspaper's website is here. Since this Chat was conducted, we've learned that Anderson will be in the GNC Live Well Liberty Mile in Pittsburgh on August 17.