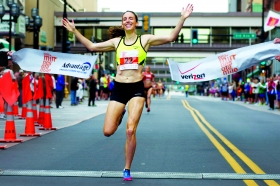 In 2013, Gabe captured the Minnesota Mile in 4:21.3, a PR, and she also smashed the course record and clocked the fastest Mile ever run by a woman in Minnesota!

In 2012, Gabe was fourth at the U.S. Olympic Trials 1500 meters and the runner-up at the Falmouth Mile (4:27.94, a track PR), and in 2011, she had a pair of third place Mile finishes at the USA 1 Mile Road Championships and also at the USA Indoor Championships.

Anderson was the 2010 NCAA Outdoor Championships runner-up at 1500 meters, earning All-American status for the University of Minnesota as a Golden Gopher.

“My message is that it’s OK to struggle, but it’s not OK to give up on yourself or your dreams.”

FUN FACT: Gabe was a talented singer and loved to karaoke & dance.

Seattle-based Brooks Running, also known as Brooks Sports Inc., specializes in American apparel across the Seattle area and the world. While an ordinary year may...

RENO – The late Gabriele “Gabe” Grunewald, a cancer research advocate and 2014 USATF Indoor 3000m champion who passed away in June at age 32 following a decade-long battle with cancer, was honored...

From Herculis meet for the IAAF

Organizers of the Herculis meet announced on June 25 – on what would have been Gabriele Grunewald’s 33rd birthday – that the women’s Mile event at the IAAF...

"It’s a chance for the community to say that we are proud of what she did and honor her family.”

No matter what was happening in Gabriele Grunewald’s life, running was her North Star. Taking to the trails never failed to...

MINNEAPOLIS — One of the first races Gabriele Grunewald (née Anderson) ran, she got lost. She was in middle school in Perham and ran the...

‘Brave Like Gabe’: Remembering the Runner Who Never Gave Up in the Face of an Unbeatable Opponent

Gabe spent the last years of her life fighting, living, running… inspiring others… fully aware that she was not winning her own fight, but fighting ever harder just the same.

On a June night two years ago, I went to dinner with Gabe & Justin Grunewald at a...

I think having that constant reminder of my mortality can be scary and bewildering at times, but other times it can be a great motivator and helps me clarify what’s most important in my life.

Gabriele Grunewald is an inspiration. She has raced to titles on the track and roads,...

“Throughout all of it, I believe something will work for me eventually. In the meantime, I gotta live my life.”

During the past year, Gabriele Grunewald, 31, has tried to maintain her presence as a professional middle-distance runner while pursuing all available...

“I wouldn’t wish this on anyone, but I have learned that the human mind and body are truly resilient. I rule nothing out.”

It was on the morning of Good Friday in 2009 when the runner first met her cancer. She was a fifth-year senior at Minnesota, sitting in...

“I don’t always love talking about it. It’s not a made-for-TV movie. It’s real. It’s scary.”

EUGENE, Ore. — Gabriele Grunewald stepped onto the track as the dying light of day yielded to periwinkle evening.

She and her fellow world class runners walked...

Medtronic TC 1 Mile up next for Gabriele Grunewald who endures the uncertainty of her future by continuing to do what she does best.

As the clock ticks past two minutes, the first signs of stress announce themselves on Gabriele Grunewald’s face.

Gabriele Grunewald, Gabe to her friends, is a professional runner and...

Hometown favorite goes for Minnesota Mile win on Sunday; perserverence and the quest for the perfect Mile

Whether it has been injuries, cancer or politics, Gabriele Grunewald of Team USA Minnesota has not only perservered, but thrived as a professional Track & Field...

Defending GNC Live Well Liberty Mile champions Jordan McNamara and Gabriele Grunewald will return to the Steel City to defend their titles at the 2015 race, scheduled for...

Gabriele Grunewald has no trouble admitting that before being diagnosed with cancer at the age of 22, she had no realistic prospects as a professional...

Bring Back the Mile's 2014 interview series, presented by HOKA ONE ONE, kicks off with Team USA Minnesota middle distance ace Gabriele Grunewald (née Anderson). Known as "Gabe", she earned her first national title and U.S. team berth last February at the USA Indoor Championships in the 3000m. She...

Gabriele Grunewald, better known as GG or Gabe, is an American middle-distance runner from small town Minnesota or Perham, MN to be exact. A...

Ranked U.S. #4 in the 1500m each of the past two seasons, Gabriele (nee Anderson) Grunewald is on the cusp of smashing through the brick wall that is a...

Miler Anderson Looking to Step Up Her Game in Doha

DOHA, Qatar – (May 9, 2013) – Several days after finishing fourth in the 1500m at the U.S. Olympic Trials last July, Gabriele Anderson was finally able to get over falling two seconds shy of qualifying for London.

It was then that the pain gave way to a...

When diagnosed with adenoid cystic carcinoma in 2009,...

Gabriele Anderson, 26, was the fourth-place finisher in the 1500 meter run at the 2012 U.S. Olympic Trials in Eugene. On July 17 in Lignano, Italy she lowered her personal best to 4:04.84. Anderson is a survivor of two types of cancer—adenoid cystic...

By Pat Price, writing about running

Today we have 5 Questions with a former Minnesota Golden Gopher and now a member of Coach Dennis Barker's Team USA Minnesota. Most recently, the "Brooks Beast" was awarded Flotrack's "Kick of the Week."

MINNEAPOLIS - Methodically, Gabriele Anderson motors around the University of Minnesota track.  Singularly focused, she has her sights set on gaining a spot on the United States Olympic team in the women's 1500 meter race. The Olympic Trials is set for late June in...