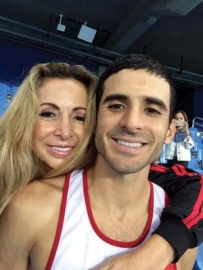 In 2015, Torrence won the Pan Games 5000m silver medal and the inaugural HOKA ONE ONE Long Island Mile in 3:53.91 (still the meet record) to edge Garrett Heath, and Torrence also used his Mile speed to win the USA 5K title in Providence, RI, clocking 13:56.

FUN FACT: Torrence had dual citizenship, and he represented Peru at the 2016 Rio Olympics and ran the 5000 meters.

In honor of her late son David, an Olympic runner, Malibuite Bianca Torrence is working to realize his dream of bringing the sport to a new generation.

By McKenzie Jackson, Special to The Malibu Times

When Bianca Torrence goes for a run, there is often an unseen force propelling her forward.

“David knew he had greatness in him and wasn’t afraid to step up to the plate swinging for the fences. I hope this sentiment becomes an enduring part of his legacy. His bold efforts and bright spirit deserve it.”

David Torrence spent a good part of his 32 years doing what he loved—running. He started running in ninth grade and continued running right up...

David Torrence, an athlete who ran in last year's Rio Summer Olympics and had been training for more races, was found dead in a swimming pool in...

The Malibuite, a runner for Peru’s national team, set the South...

The book is closed on the 2015 Lodi Mile.  The event, presented by Blue Shield of California, Michael David Winery and...

Beginning with Steve Scott’s three victories in 1986, the American presence at the Carlsbad 5000 has always been strong.  But except for Steve the only other American male champ at the World’s Fastest 5K has been Doug Padilla in 1990 (13:29).  This year the possibility of a...

Ryan Ponsonby (coach of Olympic Silver Medalist, Leo Manzano) takes you through a series of running...

So when he was photographed recently wearing a jacket without the familiar logo,...