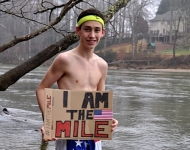 SANTA BARBARA, Calif. – (December 12, 2012) – Bring Back the Mile launched on January 18, 2012 with a video and a cardboard sign that read “I am the Mile”. BBTM’s mission is to elevate and celebrate one of the most iconic events in sport, the Mile, and also to replace the misfit 1600 meters at the U.S. high school level, a distance that falls nine meters short of prep athletes’ dreams.

Over the past year we have connected with Mile Maniacs and fans all across the country and the world including Sandwich High School in Massachusetts as well as professional Milers such as 2012 Olympic silver medalist Leo Manzano and Team USA Minnesota’s Gabriele Anderson who have supported us throughout the year. And we have been humbled by the support of the legends such as Jim Ryun who engages our youth in our favorite sport through its marquee event - the Mile.

To honor all of those people who have joined and supported BBTM in Year One, we are launching the #IAMTHEMILE Anniversary Video Contest. This is your chance to be an internet star, get featured on RunnerSpace.com, and win some great prizes including a grand prize $359 gift certificate from Running Warehouse and four $35.94 runner-up gift certificates. Here’s the low-down:

LAP 1: Grab your favorite piece of cardboard and write “I (WE) AM THE MILE” in addition to anything else you’d like. Make it your own. Have fun!

LAP 2: Submit a photo of yourself, team, family or even pets at www.bringbackthemile.com/iam or emailing milemaniac@bringbackthemile.com. You may also submit via RunnerSpace.com, Twitter and Instagram using the hashtag #IAMTHEMILE.

LAP 3: Submit a video of yourself, team, family or even pets at www.bringbackthemile.com/iam. You must link directly from YouTube, Vimeo or other video hosting services including Facebook. You may also share the video using the hashtag #IAMTHEMILE on YouTube and RunnerSpace.

Contest Not so Fine Print
Submitted photos and videos become property of BBTM for use on related websites, social media channels and other mediums. Accepted submissions will be notified by email or social media account with instructions on claiming prizes within two weeks of contest end date. Grand prize winner to be selected by BBTM staff.