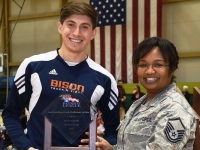 "I think that took him to the next level and now he's got confidence and swagger a great Miler needs."

Fast forward to 2015 and the same could be said of Bucknell University senior Andrew Garcia-Garrison, a Novi Detroit Catholic Central High grad who moved a step closer on Sunday at Boston University's Last Chance Meet when he ran a winning 4:00.51.

Garcia-Garrison had already set the school record in the event earlier this indoor season, running a 4:02.35 at the Penn State National Invitational.

"Andrew ran a great race," Donner said. "He may have still been a tad fatigued from four races at leagues, but he was able to muscle his way to a win and a nice PR."