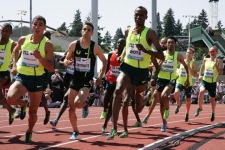 “I feel I’m still trying to establish myself as one of the top runners.”

Matthew Centrowitz was on hand for the big Bowerman Mile that always concludes the Prefontaine Classic meet. He was surrounded by a sea of pan-Africa – Algeria, Morocco, Djibouti, Kenya, Ethiopia. To get the pace going, Kenyans were even used as the rabbits. How about 53.5/1:52.2 for your first 800?

This turned into an extremely fast race, the fastest Mile ever run in the United States. Six runners were under 3:50, which did not include either Asbel Kiprop, the reigning world champion and former Olympic champion, who was 7th in 3:50.26, or Centrowitz, 2nd only to Kiprop last summer in Moscow, who was 8th in 3:50.53 but wasn’t happy about it, even though it reduced his PR all the way from last year’s 3:51.79.

“It was OK,” said Centrowitz, still just 24-years-old. “I can’t say it was great. I expected more of myself.”