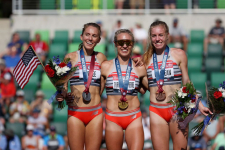 Cory McGee, 29, finished second in 4:00.67 and Heather MacLean, 25, placed third in 4:02.09 to also qualify for Team USA heading to Japan this summer. All three runners set lifetime bests, and it is the first Olympics for the Tokyo trio.

In a tight battle down the homestretch, Shannon Osika finished right behind MacLean to place fourth in 4:02.18.

Purrier St. Pierre, a University of New Hampshire alum, assumed the lead from the gun, but she was elbowed off the track in the first 100 meters. After regaining her footing, she brought the field through the first 400 meters in 64 seconds with McGee and Dani Jones running behind her.

“I don’t know what happened,” Purrier St. Pierre said. “I was in the first lane, I was number one so I was obviously on the rail, and I think that when the girls cut in there was a collision somewhere that just kind of shoved me off and I just jumped back on the track as fast as I could and tried to not let it bother me, but also I think it gave me a little bit of a boost.”

“I’ve been dreaming of this moment for so long and it’s really emotional and I’m just so happy, happy that my family is here to share this with me and my teammates and for everybody that’s believed in me,” Purrier St. Pierre said.

“I led most of it because I knew I believed in myself. I knew that I was strong enough to do that and I wanted it to be fast,” she said. 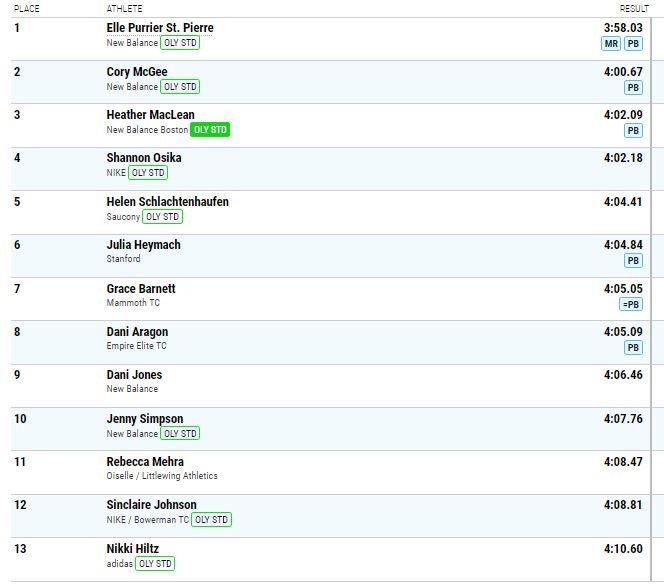