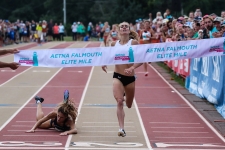 Down the final straight, Engels, 24, used a savvy strategy to move from mid-pack to first, passing three-time NCAA champion Josh Kerr and 2016 Rio Olympian Ben Blankenship, who won here in 2013, in the process. Although it was Kerr who defined the race through the opening three circuits, Engels wouldn’t be denied.

Kerr fronted the effort though one lap in 60 seconds and hit halfway in 2:02 before the pack began to shuffle in his wake. Blankenship moved up, Pat Casey fought for second, Engels held strong in third, and Kerr set the stage for a memorable bell lap (three laps was hit in 3:03).

Kerr and Blankenship traded the lead twice down the backstretch, and into the final bend it looked as if it would be a duel to the line. Then, seemingly out of nowhere with 80 meters left, Engels surged on the far outside to clock a 3:58.88 repeat win.

Casey and Blankenship had been racing well, “so I was just going to hop behind them,” said Engels, who trains in Portland, OR, of his strategy coming into the race. “Luckily Kerr took the pace, which is so hard to do. Props to him for that.”

“Let’s make it three next year!” he said.

If Engels’ win was exciting, then Schneider’s was electrifying. With the field stringing out just over halfway in 2:13, the trio of Schlachtenhaufen, Schneider, and Boston-based Cory McGee began to establish themselves as favorites. Only with half a lap remaining was Schlachtenhaufen truly challenged, as Schneider came up on her shoulder jockeying for position.

Into the stretch, the pair traded the lead, Schneider surging and Schlachtenhaufen responding with a kick of her own.

Two meters from the line, the Dartmouth alum was passed by Schneider, the latter raising her arms to celebrate a 4:27.23 win. Right behind her, Schlachtenhaufen fell hard to the track, but got to her feet and walked across as runner-up in 4:31.44. McGee rounded out the podium in 4:31.56.

“Helen really pushed the pace as soon as [pacer] Brooke Feldmeier stepped off. She kept it really honest and really fast,” said Schneider, who trains in Flagstaff, AZ. “I think I passed her with about 150 [meters] to go and she responded … I think we just kind of bumped arms and legs with 10 to 15 meters to go. I feel really bad she went down. Unfortunately that’s totally the way the 1500 meters goes sometimes. I feel really bad. She did an awesome job fighting to the very end.”

Schneider, 27, has been on a roll, after just last week winning the NACAC (North American, Central American & Caribbean Athletic Association) 5000m title in Toronto on August 10 and then finishing fourth in the 1500 meters on August 12. And the New Hampshire native isn’t slowing down yet: Tomorrow she’ll race the Brooklyn Mile.

Each Aetna Falmouth Mile champion took home $3500, and Schneider also secured a $1000 bonus for going under 4:30 and winning the race.

In the Girls’ Tommy Cochary High School Mile, Grace Connolly ran away with the race, becoming the second girl to win back-to-back titles. By halfway, Connolly had a 50-meter lead, and with a lap remaining owned a 16-second margin on the chasing Caroline Johannes (Hingham, MA). Connolly, an All-American on the track whose family spends summers in Falmouth, would break the tape in 4:59.99. Though she was off her 4:56.33 event record, which she set last year, Connolly was pleased to come out on top.

“I really had no idea what shape I was in. I was just going for place today, and I would just see what my time was, but I really wasn’t expecting that,” said Connolly. Runner-up honors went for the second year in a row to Sarah Roffman (Littleton, MA), who overtook Johannes just short of the line, 5:17.67 to 5:17.98.

John Mariano of Quincy, MA, led almost the entire way in the Boy’s Tommy Cochary High School Mile, taking the title in 4:29.10. Challenged repeatedly by Rishabh Prakash and Tyler Brogan – both of whom briefly shared the lead in the race’s second half – Mariano managed to regain pole position with 80 meters remaining.

Sporting his lucky Larry Bird socks, Mariano was confident coming down the stretch. “I wanted to win, so I just kind of convinced myself I was going to,” he said.