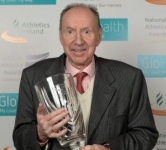 “Where do you stop, after all, with the brain? How does it function? What are its limits?” - Sir Roger Bannister

Frank Murphy doesn’t run anymore, except in the near distance of his long and perfect memory. Because even at age 67 he can recall every single one of his many championship races like yesterday, especially those that involved breaking through perhaps the greatest pain barriers of all.

“Men, today we die a little,” said Emil Zatopek, before the start of the 1956 Olympic marathon, and no athlete knew more about the suffering of distance runners. Zatopek broke 20 world records, over 10 different distances, all marked by his tortured running expression, as if someone was twisting a knife into his back.

No athlete touches on greatness without breaking through a barrier of some sort, physical or psychological, no matter what their sport. “And you would get used to it,” says Murphy, who unlike Zatopek helped mask his pain with a colossal and graceful stride. “Not that it becomes easier, but you become more willing to embrace it. I just wonder a little, now, did we really understand just how far we were pushing ourselves.”

Murphy is telling me this at a hotel in Santry, shortly before collecting a Hall of Fame award from Athletics Ireland. He grew up around Santry, in every sense – the Morton Stadium the scene of many of his breakthrough runs – and he still lives a short distance away, in Swords. “Always a northsider,” he says. He seems uneasy about entering a hall of fame – “usually a waiting room for something else” – although there’s no denying his right to be there. Murphy may not be Ireland’s greatest athlete, but he could be the most underrated.

The first of many great barriers he broke was 4 minutes for the Mile, on June 1, 1968. By then, Murphy was already running beyond the norm. His schoolboy records helped convince Jumbo Elliott to offer him a scholarship at Villanova, and in his first summer home in 1967, just turned 20, Murphy won his second successive Irish senior Mile title.