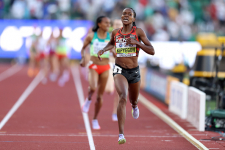 In the women’s 1500m at Hayward Field, where Faith Kipyegon cemented her place as the greatest 1500 meter runner of all-time – winning her fourth global 1500m title and setting a high bar for future generations to follow.

But she was made to work for it, with a breathless, lung-bursting pace churned out from the gun by chief rival Gudaf Tsegay, the Ethiopian blasting the opening lap in 58.82, and hitting 800m in 2:03.18.

If her rivals wanted to stay with Tsegay, then they’d have to go to a dark place. In addition to Kipyegon, only Britain’s Laura Muir and Ethiopia’s Hirut Meshesha were willing to gamble and stick with it. For Muir it paid off. For Meshesha it didn’t, and the Ethiopian fell to pieces on the final lap, finishing 13th.

With a lap to run up front it was down to three, and down the back straight Kipyegon could wait no longer. The two-time Olympic champion powered to the lead and kicked away, hitting the line in 3:52.96 ahead of Tsegay (3:54.52) and Muir (3:55.28). It was the 10th fastest time in history and the second fastest ever in the USA, behind the 3:52.59 she ran on the same track in May at the Prefontaine Classic.

“The Ethiopians controlled the race and I knew they were planning something special but for me, I was well prepared,” said Kipyegon, who said she is targeting a PB at the Wanda Diamond League meeting in Monaco next month. “Everybody was expecting something special from me. Everybody was like, ‘Faith, we believe in Faith,’ so it was a real pressure. But I managed it.” 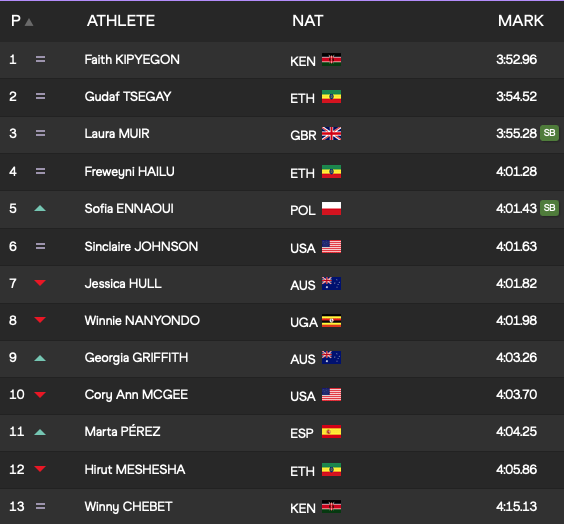