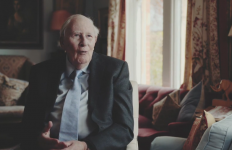 Christie’s to auction the shoes worn by Sir Roger Bannister when he became the first man to run a sub-4 minute Mile, described as the ‘greatest athletic achievement of the 20th century’

From Christie's The Art People

The running shoes worn by Sir Roger Bannister CBE when he became the first man in history to run a sub-4 minute Mile are to be auctioned by Christie’s this September. Forbes magazine named Bannister’s historic milestone as the ‘greatest athletic achievement of the 20th century’.

This historic race took place on May 6, 1954 during a meet between the British Amateur Athletics Association and Oxford University at the Iffley Road Track in Oxford. The shoes Bannister wore for his record-breaking run were made by Charles Law of GT Law and Son, Wimbledon Park, London, and weighed four and a half ounces, much lighter than any existing shoes.

‘I could see there was an advantage in having the shoe as light as possible,’ says Bannister, who started his running career whilst he was a medical student at Oxford in 1946 and soon showed great promise as a ‘Miler’. ‘The leather is extremely thin and the spikes are unusually thin, as I used a grindstone to make them even thinner. These shoes are the last tangible link I have with the 4 minute Mile. All my trophies are now on display at Pembroke College Oxford, where I was Master.’