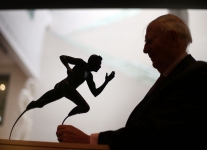 Britain was still reeling from World War II in the early 1950s. Then came the coronation of a new queen, the conquest of Mt. Everest and, in May 1954, the breaking of the four-minute Mile by Roger Bannister.

Bannister and his epic run helped rally the nation. His record, along with the 1966 World Cup victory, ranks among the U.K.’s greatest sports triumphs. While he never won an Olympic medal, Bannister, 83, will carry the torch today in Oxford and he is one of the favorites to light the cauldron when the London games open July 27.