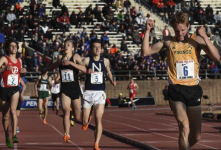 Loudoun Valley junior Andrew Hunter could have attempted to defend the 3000 meter title he won a year ago. But during the cross country season, Hunter decided against what he said would have been the easier path. Having showed his prowess in long distance races, Hunter had his eyes on a different event at the 121st running of the Penn Relays.

He wanted to run the Mile.

Hunter varied his training and implemented more speed work, wanting to avoid being pigeon-holed as a two-Miler. Hunter trained vigorously — all of it leading up to Friday’s Mile at Franklin Field.