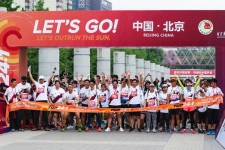 International event "captured in a single live feed and hopefully thousands of new runners joining the biggest global sport on the planet.”

Taking to the streets in 24 cities across 15 time zones, more than 12,000 runners participated in the inaugural IAAF Run 24:1 global campaign on Wednesday, June 6 in a series of continuous one Mile runs to celebrate Global Running Day 2018.

The goal of the campaign was to inspire and motivate individuals and communities to participate in the world’s most accessible sport and experience the excitement and fun of running. The result was the largest continuous Mile run to ever take place across multiple cities in 24 hours.

"Running against the clock to outrun the sun unveiled an extraordinary group of runners, many running for the very first time, in our 24 Mile races from Auckland to Vancouver,” said IAAF President Sebastian Coe, who joined several hundred participants on the famous Promenade des Anglais in Nice, France, where the journey to outrun the sun reached its halfway point.

"My sincere thanks go to all our member federations who worked with city officials and road running organisations to deliver this ambitious event in record time and to all the athletes and runners that took part. It was extraordinary, and a little nerve wracking, watching our 24 hour live feed as a new city and its excited runners took up the baton every hour.”

The route continued through Asia via Beijing and then Bangkok, which hosted the day's largest gathering with 2,018 participants, including Minister of Tourism & Sports Weerasak Kowsurat. Delhi also hosted a large run with close to 1,000 participants taking in some of the city’s most iconic locations including the Raj Ghat memorial to Mahatma Gandhi.

The campaign then entered Europe in Minsk, before returning to Asia in Ramallah where history was made as the city became the first in Palestine to host an international athletics event. Despite being held during the holy month of Ramadan, several hundred people turned out to take part on the West Bank.

The run moved on to Africa and Addis Ababa as the Ethiopian capital, one of the spiritual homes of running, welcomed the series of Mile runs to the continent. The event was captained by one of the world's greatest running legends, Haile Gebrselassie, currently the President of the Ethiopian Athletics Federation.

Addis Ababa handed the baton to Johannesburg before returning to Europe for stops in Nice, where runners ran alongside city’s Team Captain Stephane Diagana and marathon world record holder Paula Radcliffe, Berlin and London. It then returned to Africa where a thousand runners ran through Rabat and continued to Abidjan and Praia, Cape Verde, the Atlantic island nation that served as a segue between Africa and the Americas. Among the enthusiastic participants was Cape Verdean President Jorge Carlos Fonseca.

The IAAF Run 24:1 trail through the Americas began in the massive Brazilian metropolis of Sao Paulo, where wave upon wave of a thousand runners participated in a series of races in the city's central Vale do Anhangabau district before moving on to Argentina’s capital Buenos Aires.

After reaching North America in Toronto, the route returned to South America and the Peruvian capital Lima, before heading north again via Mexico City where more than 1,500 participants gathered, the second largest crowd of the day. It then hit Santa Monica Beach in Los Angeles before its final stop in Vancouver.

“24 cities, 24 1-Mile runs in 24 hours across 15 time zone captured in a single live feed and hopefully thousands of new runners joining the biggest global sport on the planet,” Coe said.