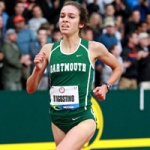 The Darmouth junior has the fastest Mile time of the year and will race the event at Millrose next month.

Twenty-year-old Dartmouth junior Abbey D’Agostino had a busy 2012. After recording a huge 5000-meter PR at the Mt. SAC Relays last April, she won the NCAA title in the 5000m, then qualified for the Olympic Trials finals in the event. There she came up just .21 seconds short of qualifying for the London Games, finishing fifth overall in a photo finish for the third and final spot. In the process, she again lowered her PR, to 15:19.98. After struggling with a hip injury early in the fall, D’Agostino returned to form quickly, placing second at the NCAA cross country championship last November.

Today, D’Agostino was introduced as one of the headliners for this year’s Millrose Games, slated for February 16 at the Armory in Manhattan. In the indoor track season’s early stages, she has the fastest Mile time in the world this year, 4:34.15, which she ran in a solo effort at the Dartmouth Relays on January 13. She’s coached by Mark Coogan, who was on the U.S. marathon team at the 1996 Olympics.