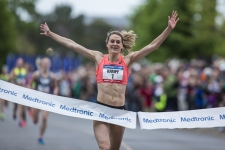 For Heather Kampf, who two weeks ago won her fourth USA 1 Mile road title in dominant fashion, the appeal of the race derives from its simplicity.

“It brings it down to the base level of when you’re a little kid and you’re like, ‘I can run from here to there,’” she says of her specialty. “It’s really instinctual. You throw the pace out the window and you just race.”

That don’t-overthink-it mentality has garnered Kampf, 29, a series of impressive wins:

Kampf said her road Miling success is partially a result of her confidence and partially a product of an event that’s more forgiving of tactical errors than one taking place on a 200 or 400 meter oval.