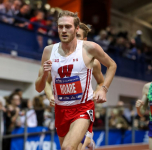 “The WHOOP Wanamaker Mile is one of the most renowned races in all of track & field, and this year’s version promises to be one of the great races ever,” said Millrose Games Meet Director Ray Flynn.

Kerr became the second fastest 1500m runner from Great Britain ever with his medal-winning run in Tokyo. While competing at the University of New Mexico, the Scottish athlete was the 2018 NCAA Indoor Mile champion as well as the Wanamaker Mile runner-up.

“The Wanamaker Mile has always been a staple in my indoor season; there is no race like it,” said Kerr. “I’m rested and ready to get ‘stuck in’ after a successful Olympics.”

Hoare placed second in the 2020 Wanamaker Mile and reached the Olympic final in Tokyo this past summer. Hoare was the 2018 NCAA 1500m champion while at the University of Wisconsin, taking down Kerr in the process.

“The Wanamaker Mile is one of the most prestigious indoor Mile races in the world,” said Hoare. “To be able to go and compete again for the third time in this event is a privilege. [Coach Dathan Ritzenhein] and I are happy with where I am right now and I'm confident that I can take on whatever comes at me. Don't be surprised if you see some very fast Mile times come out of New York.”

There are talented Americans in the field, led by Clayton Murphy, the 2016 Olympic bronze medalist in the 800m. Murphy also won the 2021 U.S. Olympic Trials and reached the 800m final in Tokyo. He is no stranger to the Mile distance, having placed third in the 2019 Wanamaker Mile.

Also set to compete is the 18-year-old phenom Hobbs Kessler out of Ann Arbor, MI. Kessler first broke the indoor high school Mile record before later erasing the HS and U.S. Junior outdoor 1500m records of greats Alan Webb and Jim Ryun. Having recently turned professional, Kessler will look to keep ascending towards the top of the global heap.

Craig Engels, the 2019 USA 1500m champion and World Championship finalist, will also feature. He will be joined by a pair of Olympic semifinalists, Andrew Coscoran from Ireland, and Charles Philibert-Thiboutot from Canada. Rounding out the field will be Mario Garcia Romo, who placed third in the NCAA 3000m last March, along with 2016 NCAA Indoor Mile champion Henry Wynne and veteran Colby Alexander. 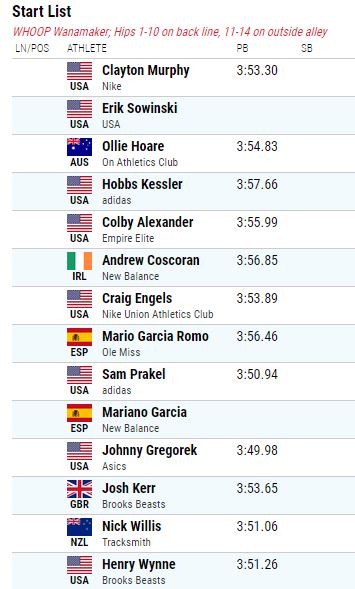