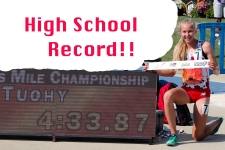 The only people that "Girls Athlete of the Year" Katelyn Tuohy has trouble running away from these days are her growing legion of fans. The New York distance phenom produced a string of phenomenal performances all year that left her competition ever farther and father behind. At the same time, the pack of well-wishers, autograph seekers and selfie takers has grown exponentially, giving the private 16-year-old a jarring taste of celebrity.

Tuohy (North Rockland, Thiells, New York) capped her spectacular soph season in June with an outdoor national record 4:33.87 in the Mile to defend her New Balance national high school title (only Mary Cain and Alexa Efraimson have run faster than that indoors, but against the pros). “That was pretty special,” she says. “First of all it was like 95 degrees and humid, so it was definitely a challenging race. I was pretty happy with how I kept calm before the race and didn’t stress at all about the conditions.”

With the record as her target, the quietly confident Tuohy paced herself perfectly. “I just remember hitting that last lap, hearing the bell and looking at the clock and thinking that all I needed to do was run a 70-second lap,” she says. “I’ve done that so many times in the past, so I was just chasing down the time.”