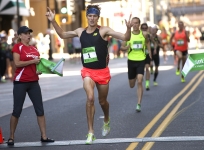 Minnesota Mile favorite and 3:53 Miler on NJ*NY TC, Frank the Tank vs. Michael Jordan and foregoing European track to compete in the U.S.

As with many boys growing up in the 90s, Jack Bolas wanted to be "Like Mike", especially for a boy growing up in Chapel Hill, NC. Lucky for our sport, Bolas found Track & Field after an unlucky injury playing basketball in the 3rd grade. He has since gone on to become a 4 x NCAA All-American for the University of Wisconsin, the 2014 BBTM GP Tour champion and the first Miler to break the 4 minute barrier on Alaskan soil.

A member of the New Jersey / New York Track Club Bolas claims a swift 3:53.5 road Mile PR. He will be defending his 2014 Minnesota Mile title and also have the opportunity to defend his BBTM GP Tour crown with a 1st or 2nd place finish.

Bolas enters Sunday's Minnesota Mile in Duluth, MN, as the fan favorite and took time to answer questions for BBTM about Coach Gags, Frank the Tank, Michael Jordan and foregoing European track meets in 2015 to compete in the U.S.

BBTM: You're looking to defend your BBTM GP Tour title from 2014 on Sunday. How has training gone leading up to this Mile?
Jack:
The training has been fairly consistent, but with some ups and downs. I think this time of year, after a long season, my main goal with training is to maintain fitness and try to stay healthy. That can sometimes be a little tough but I will say that I’m feeling fresh and ready to roll on Sunday.

What is it like to be a part of the NJ*NY Track Club, which seemingly continues to grow in numbers and depth every year?
It’s an honor to be a member of NJ*NY TC. Gag is a coaching legend for a reason and he has supported me unconditionally this season even when I was running poorly. He’s truly a special person. Additionally, the team is such a great group of men and women. So many talented people to train and compete with and keep you going through an arduous season. 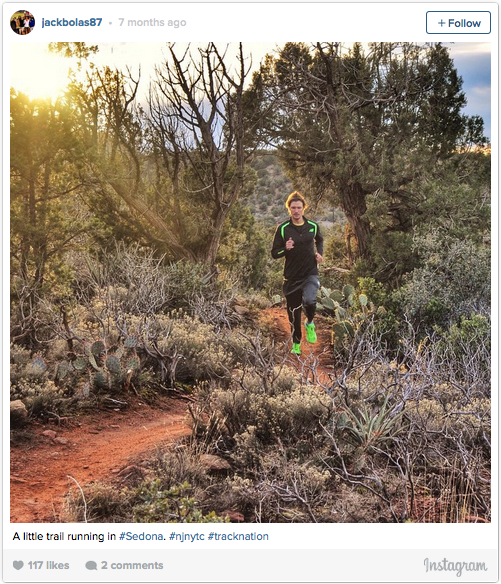 Are there similarities to being part of a collegiate team and if so, how does the team atmosphere help professional Track & Field athletes continue to compete post-collegiately?
It’s very similar to being on a college team. I think that’s why I’m so happy to be a part of NJ*NY. A superb coach and a couple dozen athletes who are all like-minded with shared goals and a shared sense of purpose. Clubs like NJ*NY are the future of professional running. The support system that NJ*NY provides means that each athlete here can reach their full potential. Personally, I would not still be competing post-collegiately without the backing of this club.

Give us one good Coach Gags story! Maybe a favorite workout, phrase or other moment.
There are so many great Gag stories and I’ve barely been here a year. You’d really have to ask one of the Gag veterans. All I’ll say for now is the man knows everything about everyone on the team, at all times. Literally, there is nothing you can hide from the guy somehow. He’s the Godfather. Also, if you’re tired, always remember to “go to the elbows!” But I think I’ve shared too much already. 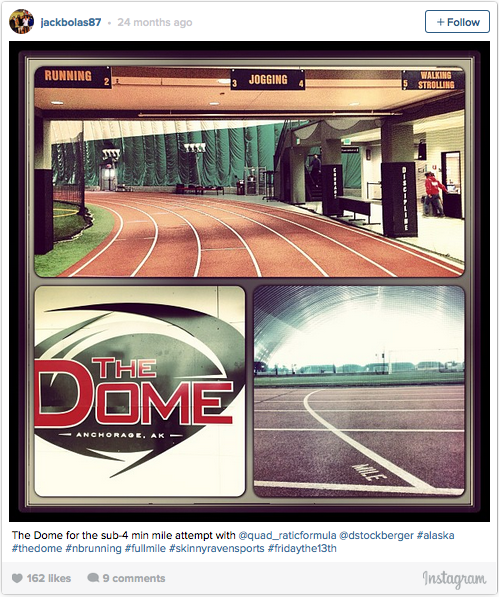 Let's go back to the summer of 2013. You traveled up to Alaska and became the first person on Alaskan soil to break 4 minutes in the Mile. What was that like for you as a Miler?
Any occasion breaking 4 minutes in the Mile can be special in its own way. The Alaska event was especially unique because of how it was all put on and all the hype locally leading up to it. It was nerve-wracking to be the center of this milestone and have a fairly large crowd out counting on me to dip under 4:00. A different sort of pressure than I experience at other races. But the pressure of the event was countered by the support of the meet director, my pacesetters, New Balance, and some very rowdy spectators.

Any other plans to chase state Mile records in the future?
Hahaha can’t say I’ve thought much about that since Alaska. I think my goal now is to break my own personal record in the Mile before I call it quits.

You have been a part of recent inaugural Miles including the Boxcar Mile which you won in 3:58.63 and last night's HOKA ONE ONE Long Island Mile, also breaking 4 minutes. What is it like as an American Miler to not only have more opportunities to race and win prize money on U.S. soil, but race in front of some incredible crowds?
It’s amazing how quickly the American race scene is changing for mid-distance runners. Boxcar and HOKA Long Island are two great examples. There are now more and more opportunities to not only run fast on American soil but chase significant prize money and do so with the support of a growing fan base. This was the first summer in the last five years that I chose not to go race in Europe after USAs. And one of the deciding factors for me was the fact that there are now so many more chances to run fast here in the States. It is really a great time to be a Miler in America.

You grew up in the collegiate basketball hotbed of Chapel Hill, NC. Are you a big fan and as a Badger alumni did you do anything but watch basketball in March?
I am an absolute die-hard Carolina basketball fan, first and foremost. But I will always have a strong allegiance to my Badger sports teams. And it was super exciting to watch Wisco make such an incredible run into the tourney this year. I got together with an old college friend of mine in Philly to watch the Final Four games.

Who are you taking on your fantasy NBA basketball team? Wisconsin's Frank the Tank or a Tar Heel by the name of Michael Jordan?
Haha, there is no greater team basketball player than Michael Jordan, and that has nothing to do with him being a UNC alumni. But I’m pumped to see what Frank can make happen in the NBA. He’s got good fundamentals and some slick moves for a big man.

What did you want to be when you grow up?
Besides a pro basketball player? Well, I always used to tell my mom that I was going to become a doctor so I could make a lot of money and buy her a big house. I’m still working on both the doctor part and the money part, but I wouldn’t change this career for anything.

What do you want to be now when you grow up?
I guess the growing up takes place once the running ends… So after this all winds down, I have aspirations to be a coach or teacher or PT potentially. There are some options. I do have a bachelors degree from the great University of Wisconsin-Madison after all.

How did you initially get into the sport of Track & Field?
I broke my arm playing basketball in 3rd grade and my coach at the time, who also worked with a club running team in the area, recommended I try out running. So that spring I went and joined in and I’ve been going ever since.

How do you define being a “Miler”?
A Miler is the ambassador for the mid-distance realm of Track & Field. Everyone inside and out of running can relate to the Mile. The best Milers have the ultimate combination of 800m speed and 5K strength, two qualities that I have been chasing for years and will continue to until I hang up the spikes.

Best Mile moment so far?
Actually last year’s Minnesota Mile comes to mind first. The race is the culmination of a long season and for me, after a somewhat inconsistent season, it was so rewarding to be able to finish it all of with a win. Grandma’s puts on a great event. They take good care of you, Duluth is an awesome city, and the race is super fun. It was really just a great way to close out 2014.