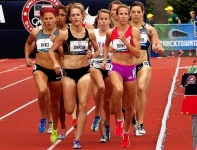 EUGENE, Ore. -- There's an epic battle shaping up for the championship of the women's 1,500-meter run at the U.S. Olympic Trials.

It will be defending world champion Jenny Simpson vs. defending national champion Morgan Uceny -- the No. 1-ranked 1,500-meter runner in the world last year -- when the final begins at 7:23 p.m. Sunday.

NBC will broadcast the race live.

The long-awaited matchup became a reality when both runners advanced from their semifinal heat Friday at the University of Oregon's Hayward Field.