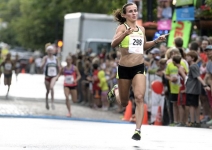 Darkness is descending and a chill is in the air as Brent and Sara Vaughn gather up their three children and head from their large backyard into their new-to-them east Boulder home this late summer evening.

The family is just back from London, where Sara made the semifinals of the World Championships 1500 meters, running 4:04.56, a personal record by more than two seconds and one of the fastest U.S. times of the year.

It was a good World Championships for CU, as Emma Coburn took the gold in the steeplechase and Jenny Simpson silver in the 1500 meters or metric Mile.

These medals understandably overshadowed the remarkable performance by Vaughn, who earned her spot by placing third in the USA Championships in June, running 60.8 seconds for her final 400 meters in storming down the straightaway to finally make a U.S. team after an up-and-down career that has come behind family and work.

Running was Sara Ensrud’s priority when she was winning four Nebraska high school titles and setting the state Mile record. That changed once she started her family.

First came love; she met Brent at the 2007 University of Colorado preseason cross country camp near Grand Lake. Then came marriage. Then came Kiki, now 10, being pushed in a baby stroller, with Calia, 7, and Cassidy, 2, to follow. Then came work —- she is a full-time Realtor for Sotheby’s International.

And, through it all, came running.

Now, at 31, she finally made her splash on the world stage.