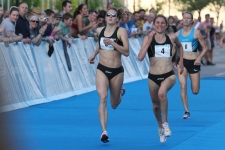 Leo Manzano, whose strong finish earned him second place in the 1500 meter final at the 2012 London Olympics, has committed to racing for the top prize of $5000. Manzano is a nine-time NCAA All-American at the University of Texas and two-time Olympian.

Hall won the Grand Blue Mile the past two years and is a seven-time NCAA All-American at Stanford. She is also the 2011 USA 1 Mile Road champion.

Rowbury qualified for the 1500 meter final in the both the 2008 and 2012 Olympics. She is a former six-time NCAA All-American at Duke.

The Grand Blue Mile is an annual event sponsored by Wellmark Blue Cross and Blue Shield and the Drake Relays.