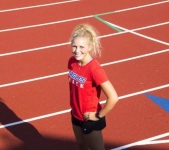 "There’s not another event where you’ll get all the best high school Milers in Maine doing a Mile on the road with all the fun stuff that goes along with it.”

Alexa Brennan has never run the Beach to Beacon High School Mile. She doesn’t have any teammates who have done it, any friends who have tried it, or any coaches who could give her a pointer or two from having competed before.

So this will be a new experience for the rising Messalonskee High School senior. And that might be her favorite part about it.

“I’m going into it a little bit unknowing, and I think that’s kind of a good thing,” she said. “I don’t really have a teammate that I can really talk to about it, which kind of makes it exciting, just going in there with so much unknown and so much to look forward to.”

As it enters its fourth season, the High School Mile has become a staple of the weekend as a showcase that runs the day before the signature Beach to Beacon 10K. It’s not an easy event to qualify for — male competitors need a Mile time of 5:00 or a 5K time of 17:30, and female runners need to beat 6:15 or 20:30 — and Friday, a field of 20 boys and 17 girls that includes 10 individual cross country or track & field champions will tackle the two-lap run at Fort Williams.

“It’s just a great opportunity to run against the best,” said Wells’ Griffin Allaire, who is seeded first for the race after finishing second last year. “There’s not one kid on that course (today) that’s not going to have a chance to win.”

For some, like Brennan, today will be an introduction to an event that’s very much a part of the Beach to Beacon spectacle. There’s music leading up to the event and a collection of past champions and well-known runners, including Beach to Beacon founder Joan Benoit Samuelson in attendance, and each of the runners has his or her name announced before the race.