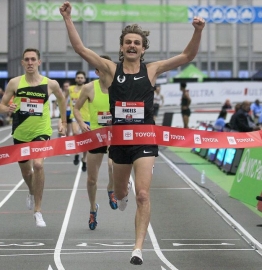 At the 2020 BU John Thomas Terrier Classic indoor meet in Boston, the charismatic star won the Mile in 3:56.85.

In 2019, he earned the USA Indoor Mile title, breaking the beam in 3:59.69; his first national crown as a pro, and in late June, he finished 5th at the Pre Classic's Bowerman Mile, clocking a personal record 3:51.60. In July at the USA Outdoor Championships, Craig captured his first 1500m crown, beating defending and Olympic champion Matthew Centrowitz, 3:44.93 to 3:44.97.

In 2017, at the USA Outdoor Track & Field Championships in Sacramento, the North Carolina native finished fourth in the 1500 meters just missing a Team USA berth for the London World Championships, and in August, he won the Aetna Falmouth Elite Mile in 4:00.19 and the inaugural Ed Murphey Mile, clocking 3:58.35, the first sub-4 ever in Memphis, Tennessee.

The 6-time North Carolina high school state champion was a member of the North Carolina State track and cross country teams from 2012-14 before transferring to the University of Mississippi where he earned NCAA All-American honors 6 times.

FUN FACT: The free spirit is also known for his trademark mullet & mustache, owns a classic RV that he and his friends travel around the country and loves doing construction projects.

FALMOUTH, Mass. – In the 25th running of the Falmouth Elite Mile on Saturday afternoon, six men went sub-4 minutes at the newly...

Craig Engels on his pro career: “I don’t know if I’m retiring or not”

"I was pretty bummed out there (at the Trials), so I came up with this little tour around America, doing Miles..."

RALEIGH — Fast and accomplished as they are, eager as they were to toe the starting line and chase the ever-magical 4 minute Mile, the...

Seven Things You Should Know About Craig Engels

“I actually don’t know how many miles a week I’m running. I don’t care, just whatever my body is feeling.”

Craig Engels burst onto the U.S. running scene in 2017, during his final year at the University of Mississippi. He was the athlete with the mullet...

"I do know I have to be ready for a 3:29 1500 if I want to be in medal contention at the Olympics. So we’ve been just mentally getting ready, doing a lot of workouts that are going to help with that.”

You think you're pining for the U.S. Olympic Trials?...

When not winning races, Craig Engels can light up a room

He had just crossed the finish line, placing third in the Camel City Elite 800 meter race at JDL Fast Track. Craig Engels' time of 1 minute and 49.03...

"If I’m going to do this sport, I want to enjoy my life and enjoy the people in the sport and everything about it.”

An elite runner with a reputation as a fun-loving guy has had some serious matters to attend to during his offseason.

If you didn’t know who Craig Engels was, it would be hard to picture him as a professional runner, let...

When Craig Engels was weighing his professional options coming...

STANFORD, Calif. - On Sunday, June 30 at Cobb Track & Angell Field, the world’s best Milers will bring their rivalry to the Prefontaine Classic for the meet’s...

Craig Engels has been described as a wanderer. He has displayed one of the best mullets (and mustaches) that you'll come...

“There are marathons where you can win a ton of money, but this is the most I’ve ever seen for a Mile race.”

When former Reagan track star Craig Engels learned he would race today in the Camel City Elite for the first time in his career, the pro...

Since the Bring Back the Mile launch in...

"And the crowd... it was like a Friday night football game. We're not really used to that.”

Nick Dwyer was the busiest man at the Christian Brothers High School track last Saturday. But when he got a chance to gather his wits and take a look around, he was...

FALMOUTH -- On Saturday evening, it was the newcomers who came out on top at the Aetna Falmouth Elite Mile at Falmouth High School with Craig Engels picking up his first professional win...

Q&A with Craig Engels on Nike Oregon Project, breaking out and chasing sub-4

When I pulled up on Matt Centrowitz, the defending gold medalist at the Olympics, I was like ‘OK, I got this.’

By Pat Price for Citius Mag

Rising U.S. Mile star sports an attention-getting mustache and mullet combination: “I feel like if I can bring something different to the sport then common folk will get into it.”

Craig Engels finished his career as an Ole Miss Rebel track runner as a...

Race among the best includes Engels

PFAFFTOWN, N.C. - Craig Engels of Reagan, who has become one the nation's top prep middle-distance runners over the past 18 months, will end his high school career Saturday in New York City.

He will be among 14 high-school-age runners invited to compete...