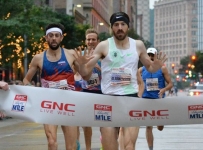 Since the Bring Back the Mile launch in January 2012, the Mile’s profile and footprint, without a doubt, has been enlarged thanks in large part to the athletes – high school, collegiate, professional and masters – rising to the occasion as well as the dedicated coaches and the events showcasing the iconic distance. The year 2017 has further added to the Mile’s elevation & celebration and The BBTM Effect as the impressive and historic annual best of snapshot below summaries and salutes. Go Mile!

In the men’s race, rising star Eric Jenkins closed with a flourish over the final lap to break the beam in a world leading 3:53.23 (and #10 U.S. male all-time indoors). Rio Olympics 800m bronze medalist Clayton Murphy was runner-up in 3:54.31 with Kyle Merber, who pushed the penultimate lap, took third, clocking 3:54.67.

In addition, 11 men went sub-4 to tie for the most indoors in the same race (also Boston Indoor Games 2006). What a day for the Mile in Beantown! 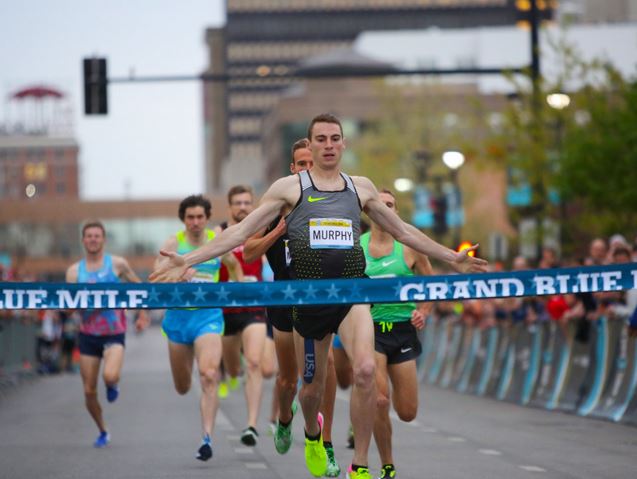 Murphy, Mackey USA 1 Mile Road Champions – April 25
At the Grand Blue Mile in Des Moines, site of the USA 1 Mile Road Championships, 2016 Olympic bronze medalist Clayton Murphy (left) kicked to victory in the men’s race, while Katie Mackey earned the upset victory on the women’s side with her 4:37. Each national champion earned $5000, while Murphy also took home a $2500 course record bonus with his 3:59.96.

He ain’t heavy he’s my sub-4 brother – May 27
The Prefontaine Classic in Eugene, OR, like past editions, attracted deep international fields for the International and Bowerman Miles, and again, the races did not disappoint with world leading performances, 3 men under 3:50 and 25 men overall clocking sub-4, but the story of the meet was, for the first time (and on the same day!), three brothers – Filip, Henrik & Jakob Ingebrigtsen from Norway – recorded sub-4 minute Miles, 3:53.23, 3:53.79 and 3:58.07, respectively. Jakob, age 16, also become the youngest ever to go sub-4. Incredible & amazing!

And 19 days later at the Bislett Games in Oslo, Jakob won the Mile, shattering his old mark with an even more impressive 3:56.29. #Wow!

Vaughn, Gregorek third at USA Outdoor Champs – June 24
At the USA Outdoor Championships in Sacramento, Robby Andrews beat reigning Olympic champion Matthew Centrowitz, 3:43.29 to 3:43.41, in the metric Mile, while 2016 Olympic bronze medalist Jenny Simpson four-repeated. But in both 1500 races, the third place finishers were the story: Sara Vaughn, 31, mother of three, and rising star Johnny Gregorek, as both closed with a determined flourish to punch Team USA tickets to the World Championships hosted by London in August.

Simpson strikes silver at the World Championships – August 7
At the World Championships in London, Jenny Simpson won a 1500m silver medal with an incredible closing finish, clocking 4:02.76, just behind Faith Kipyegon. This was the Rio Olympic bronze medalist’s third medal at the Worlds (also, Daegu 2011 gold and Moscow 2013 silver). The sterling hardware was also a bit of redemption for her non-medal disappointment at the London 2012 Olympics. Brava, jammin’ Jenny! 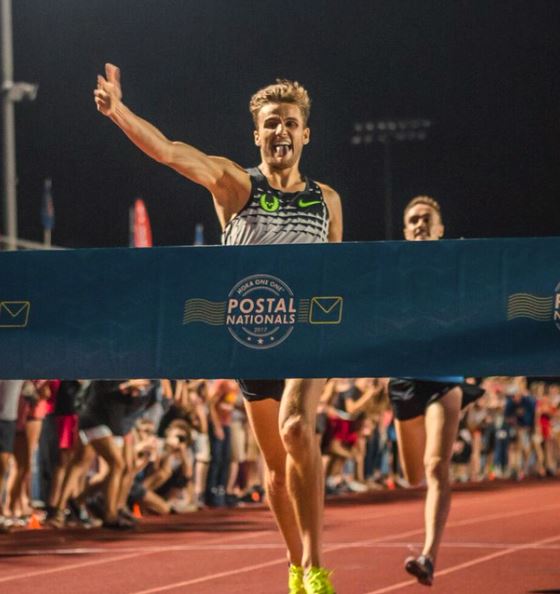 Memphis, Tennessee had not seen a sub-4 minute Mile until Nick Dwyer and the Memphis Youth Athletics put together the inaugural Ed Murphey Mile with $10,000 in prize money (in just 4 weeks). Emerging Mile star Craig Engels (right) made history by breaking the beam in 3:58.35, followed by Eric Avila (3:58.92) and Travis Mahoney (3:59.42), and the expectant crowd went wild at the Christian Brothers High School track!

In addition, at the 37th edition in 23 heats, there were a record-number 7,664 finishers, the world’s largest Mile.

Less is more – December 7
At the New York Armory, Gary Patton, 71, from Rock Rapids, IA set an age group 70-74 indoor Mile world record, clocking 5:29.81 to break the previous 30-year-old mark by 2-plus seconds. Patton does low mileage, 15 miles per week with strength and cross training. His time age-grades to a 3:58.5 Mile!

Another best moment of the year was how the sport and beyond rallied around Gabe Grunewald (below, left) and her inspiring cancer fight. Go Gabe!

Saddest moment: the passing of David Torrence (below, right) on August 28. David, a Rio Olympian and 3:52 Miler, was one of the first professional Mile athletes to support and endorse Bring Back the Mile, and he appeared in our launch video where he extolled the importance of the sub-4 minute Mile beyond just history and time. On September 6, the HOKA ONE ONE Long Island Mile honored David by designating the professional races as the David Torrence Mile. Shine on David, we miss you. 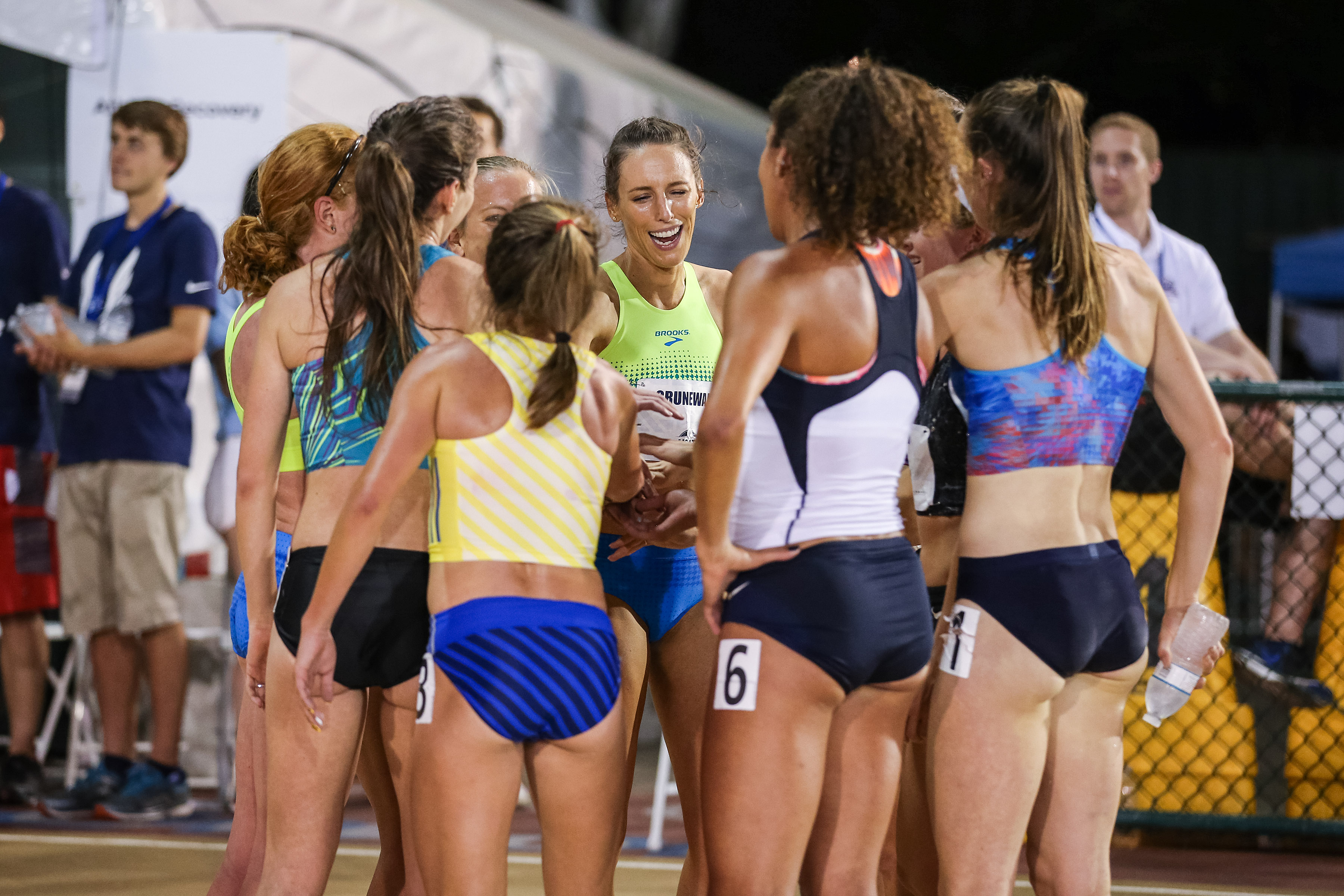 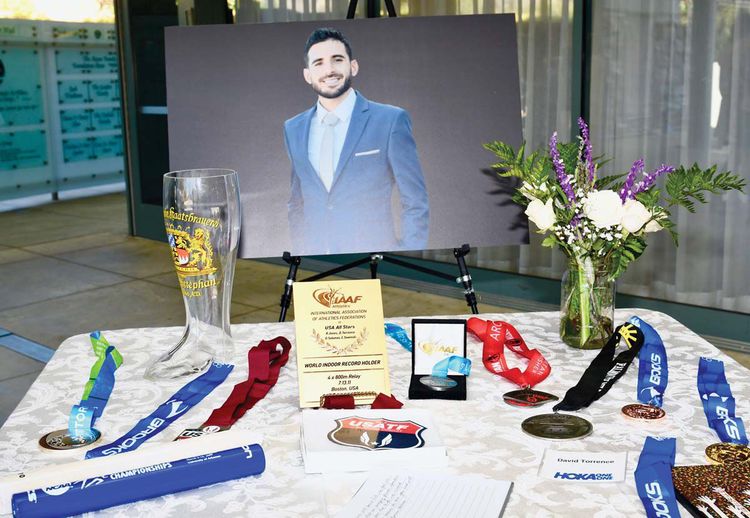