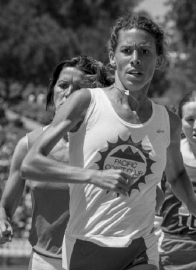 In March 1975, Francie set a world record of 4:28.5 in the Mile at the U.S.-Soviet Union indoor meet and over the course of her brilliant career set the U.S. Mile outdoor record six times, the most of any American, and the indoor Mile & 1500m world record four times (the most by any gender). To cap her decorated career, she was selected as the 1992 U.S. Olympic team flag bearer for the opening ceremony in Barcelona, Spain, the host city of the Summer Games.

Larrieu Smith was the Head Men's & Women's Cross Country and Track & Field Coach at Southwestern University in Georgetown, TX; she retired in May 2018.

FUN FACT II: The Mile legend was also selected "The Most Versatile Runner of the Quarter Century" by Runner's World magazine in 1999.

“I can look back on my career and say that, honestly, it never occurred to me that I lacked opportunity, because I was doing exactly what I wanted to do.”

It probably will come as a shock to those in the track & field community, but Francie Larrieu Smith...

Mile legend was also selected "The Most Versatile Runner of the Quarter Century" by Runner's World magazine in 1999.

Patriotism? Discipline? Perspective? Chalk `em all up to Francie Larrieu Smith. Who better to represent what the Olympics should be about?

This is a story about the flag, the Olympic spirit and one proper decision that connected...

Maverick Francie Larrieu Reigns as the Superwoman of Track

“I’m not one of their favorites. They [AAU] have a lot of Mickey Mouse rules that sometimes are a pain in the rear."

Sprawled across the overstuffed couch in her two-bedroom apartment near the UCLA campus, her stringy wet hair wrapped in a towel, Francie Larrieu doesn’t...