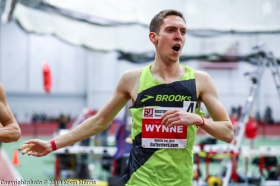 At the University of Virginia, Wynne, a 4-time All-American, won the Mile at the 2016 NCAA Indoor Championships.

More than anything though, he wants to be an example to athletes at all levels going through tough times no matter what is keeping them from the sport they love.

CHARLOTTESVILLE -- Henry Wynne arrived at the University of Virginia in the summer of 2013. Had you asked Pete Watson then if Wynne might one day win an NCAA title, the...

"We mapped out the race plan this morning and Henry followed it perfectly.”

By The Daily Progress

"To finally do it is just an incredible feeling. When you look up on the scoreboard and you see your name and you see the time you did, it becomes real.”

By Bob Birge, The Hour

"Coming into the last lap, I just said I'm not going to let them take the lead from me."

By John Nash, The Hour

GREENSBORO, N.C. -- As Henry Wynne sprinted the final few steps down the front stretch, his last-ever racing strides for the Staples High School boys track team, he raised his fist...

It's only when he competes in meets that bring together the best in the nation that Wynne seems truly challenged.

There's a saying that a prophet is never appreciated in his own land, and perhaps that goes for athletic prodigies as well.

“You’re not going to see any one like him for a while. I can’t wait to see what he does in college.”