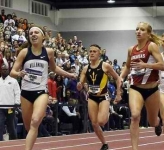 Newly crowned NCAA Indoor Mile champion: "As my years at Villanova progressed, I realized how hard it was to win a national championship."

1) Daily Relay: Congrats on your first individual NCAA championship. The race seemed to play to your strengths. How bad did you want this one, and what was going through your mind during the race?

Emily Lipari: Thank you very much! You never know how these races are going to pan out, but the most important thing I have learned is that good positioning and staying relaxed in a pack will allow you to be successful. I was on the team with Sheila Reid when I was a freshmen, and I watched her win all the time. She made it look very easy, and I wanted to be there very badly. As my years at Villanova progressed, I realized how hard it was to win a national championship. It was something I have always dreamed of and I made a decision that I will do everything possible to achieve it. During the race, I had lost contact for a bit, but I knew there was a chance that I could be top three. I started kicking with that thought in mind and realized that winning the race was not out of the question. I gave it everything I had, and If I came up short, at least I would still be All-American.