“Best Track In The World” 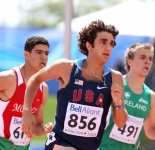 The elite fields of Saturday's New Balance Games are out and Robby Andrews, now running for adidas and coaching at Princeton, is excited to come back to the place he calls "the best track in the world, indoor or outdoor."

The NB Games will continue a busy Armory stretch for Andrews, who is running the Mile at the event. He will then go after the American record in the 1000 meter run at the Armory Collegiate Invitational on Feb. 1 and then in the Wanamaker Mile at the Millrose Games, where he will square off with Matthew Centrowitz and Lopez Lomong.

Even if Andrews wasn't running, the men's Mile at the New Balance Games would be impressive. The NCAA champion at 800 meters will be joined by an international field which includes two runners from Great Britain — James Brewer and Tom Lancashire (both New Balance) — as well as Ireland's Aidan Walsh (NYAC). The remainder of the field are Americans represented by New Balance (Craig Miller and Jack Bolas) and Frank Gagliano's NJ-NY TC (Liam Boylan-Pett, Michael Rutt, Christian Gonzalez and Travis Mahoney).