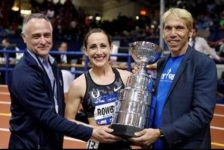 NEW YORK — Three-time Olympian Shannon Rowbury will go for her third straight title in the NYRR Wanamaker Mile, while Olympic bronze medalist Clayton Murphy will make his debut in the event at the 110th NYRR Millrose Games on Saturday, February 11 at The Armory’s New Balance Track & Field Center. The signature event at the NYRR Millrose Games has taken place every year on the men’s side since 1926 and on the women’s side since 1976. This year’s field will include five men and four women who have competed in the Olympic Games and will be broadcast live nationally by NBC Sports Group.

“The NYRR Wanamaker Mile is one of the most prestigious and historic track & field events in the world,” said Peter Ciaccia, NYRR president of events and race director of the TCS New York City Marathon. “This year’s fields are once again first class, with Shannon going for a three-peat and Clayton, one of Team USA’s newest Olympic medalists, making his much-anticipated debut in the event. Through our great partnership with The Armory, we’re honored to be able to recruit these amazing athletes to run at the New Balance Track & Field Center.”

Rowbury, 32, of Portland, OR, is the U.S. record holder in both the 1500 meters and 5000 meters, having taken the mark in the latter at last September’s Diamond League Final in Brussels, clocking a 14:39.92 to shatter Molly Huddle’s previous record. The two-time World bronze medalist ran away with the NYRR Wanamaker Mile title in 2015, winning by three seconds in 4:24.31, the #4 indoor time in the world that year. She defended her title last year, easily prevailing to take the tape in 4:24.39. The Duke grad is also a two-time 5th Avenue Mile champion who finished in fourth place in the 1500 meter final at the recent Rio Olympics.

“I’m so excited to be back at the NYRR Millrose Games, and to have another shot at the indoor Mile American record,” Rowbury said. “Racing in NYC at an NYRR event is one of the highlights of my season. The atmosphere at The Armory and the quality of the competition never fails to impress, and I hope that I can do the same.”

Murphy, 21, of New Paris, OH, was the 2016 U.S. Olympic Trials 800 meter champion and won bronze in the distance at the Rio Olympics. He set a personal record in Rio, clocking 1:42.93 to become the third-fastest American in history. Murphy, who won two NCAA titles in 2016 and a Pan American title in 2015, finished fourth the last time he was in New York City at September’s New Balance 5th Avenue Mile.

“To me the most prestigious indoor meet in the world is the NYRR Millrose Games, and the Wanamaker Mile is without a doubt, the feature event,” Murphy said. “I am looking forward to experiencing this historic event from the inside for a change. I have been enjoying myself since turning pro last summer and most of my success has come in the 800 meters, but I really feel my potential in the Mile is untapped. I can't wait to show the fans in New York what I can do.”

Added NYRR Millrose Games Meet Director Ray Flynn: “We witnessed the fastest men's Mile in the world set last year. The NYRR Wanamaker Mile continues to be one of the great indoor races and this year's fields live up to ‎the great competition we've come to expect.”

Go to NYRRMillroseGames.org to learn more including event schedule as well as to purchase tickets to the February 11 meet set for noon to 6:00pm.