ST. LOUIS – The Festival of Miles Foundation announced today that proceeds from the 2014 Festival of Miles Charity Track Meet will benefit Christopher Shaw. Shaw, 21, is currently in remission after a difficult bout with T-cell Lymphoblastic Lymphoma. He is still undergoing weekly chemotherapy treatments while attending college at Milligan University in northeastern Tennessee. 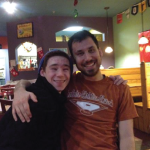 “Christopher is one of our own, a runner, and he needs help,” Rosario said. “We are thrilled to be able to bring the Saint Louis running community together to provide support to the Shaw family. That’s what the Foundation has been about from day one.”

This year’s Meet will take place on Thursday evening June 5 at Saint Louis University High School, and will feature 12 races over the course of two-and-a-half hours. The final race will once again be the Saint Louis Track Club Men’s Mile where some of the country’s top professionals will attempt to break the four-minute barrier. The mark has been bested 12 times in the last five years at the Meet.

New events this year include the high school boys and girls all-star 800 meter races, which are sure to showcase some of the nation’s top stars. The Festival of Miles is fast becoming the premier post-season high school meet in the Midwest and also features all-star Miles and 100 meter races.