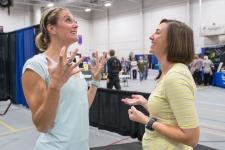 “She showed her true feelings and showed how hard it is to get back up. We can all associate with that.”

Search her name plus fall and you can see it for yourself.

One of the University of Minnesota’s most decorated runners of all time, Kampf -- at the time running under her maiden name of Dorniden -- was accustomed to leading the pack in her races. The Big Ten Indoor Track Championship's 600 meter race in 2008 was no different, until she tripped up entering the final lap.

All three competitors in her heat zoomed by as she sprawled to the ground, then the Rosemount native took chase. She got up, passed one competitor after another and won the race by a hair, eventually placing second behind a runner in another heat.

The comeback, though, helped the Gophers take the indoor title that year. So when Kampf talks about picking yourself up after you fall, she’s speaking from literal experience.

She spoke about this episode, as well as her professional career as a runner, as the featured speaker for the Orthopaedic & Fracture Clinic speaker series at Mankato Marathon’s Scheel’s Sport & Health Expo on Saturday.