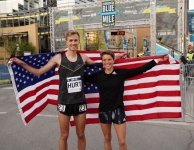 As in years past, the men’s race got out to a modest start, allowing most of the field to stick together through the first half of the race. Veteran Will Leer took over the early pacing duties, with Harun Abda closely in tow up front.

Leer started to drop back shortly after the halfway point, while nearly ten others were still in contention. With a quarter mile to go, the field was still tightly packed, with Daniel Herrera, Kyle Medina and Abda leading the charge.

None of the runners in the field made a decisive move until 200 meters to go, when Medina, Brandon Lasater and Hurt all pushed to the finish. Nick Harris and Jake Edwards also ran stride-for-stride with the lead trio, making it a thrilling sprint in the final meters.

At the finish, it was Hurt, Lasater and 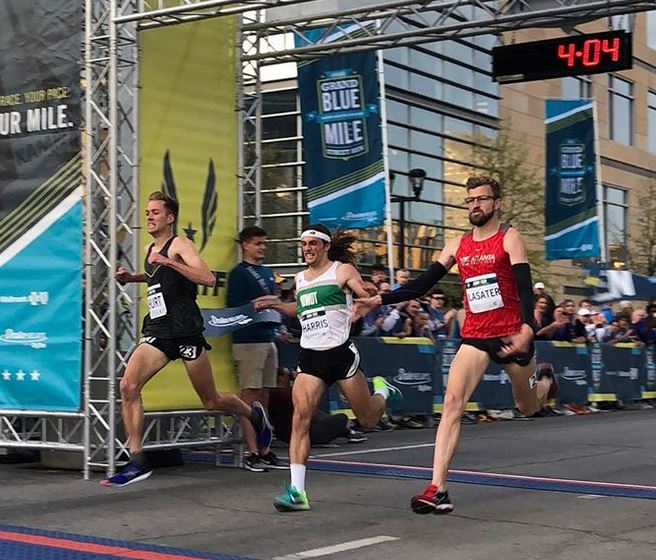 Harris, three abreast, seemingly all finishing in the same time, but it was Hurt, 26, a Boulder, CO resident, being draped with the American flag, claiming his first national crown in 4:03.9.

"My teammate, Nick [Harris], was next to me and I was thinking we needed to battle and hope one of us got it," Hurt said of the sprint to the finish (photo, far left). "My goal was to stay patient and wait as long as I could to make a move to the front. It paid off."

Lasater and Harris finished second and third, both crossing the finish in 4:04.0, while Edwards and Herrera also broke 4:05 with fourth and fifth place performances in 4:04.5 and 4:04.9. All of the top ten finishers finished less than two seconds back from Hurt.

In the women’s race, Hannah Fields and Shannon Osika led the race early, establishing the pace and maintaining relaxed forms up front.

As the runners moved into the third quarter mile, Fields, Osika, Heather Kampf, Anna Shields and Hiltz established themselves as the final five, pulling away from the rest of the field.

With just over a quarter mile to go, Kampf, a 4-time USATF 1 Mile Road Champion, shot to the lead and started her drive to the finish. Kampf, the three-time Grand Blue Mile champion and event record holder, kept her lead until 200 meters to go, when Hiltz, 24, was able to pull up on her shoulder and make her own move, one that wouldn’t be covered by anyone the rest of the way.

Hiltz, who live and trains in San Diego, continued to pull away, stride-by-stride, ultimately crossing the finish with a joyous smile on her first, claiming 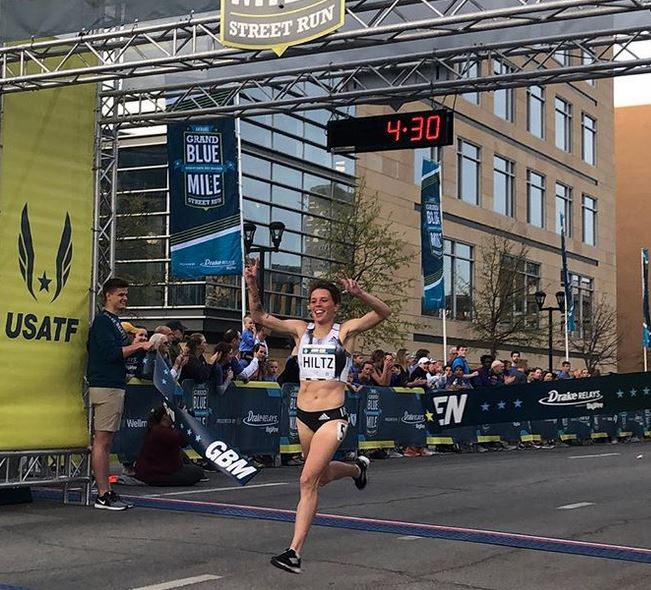 her first national title in 4:29.7, an event and USA Championship record.

"It's not just a road race, it's the USA Road Mile Championship and it's my first national championship win," Hiltz said. "It was awesome and the field definitely gave me a run for my money. We got after it and I knew in the last straightaway we'd switch into a new gear. No one made it easy."

Kampf maintained form over the final stages of the race, earning yet another top three performances, grabbing second in 4:31.4. Fields ran a great race to nab third in 4:32.2, while Osika and Shields earned fourth and fifth, clocking 4:33.4 and 4:36.4.