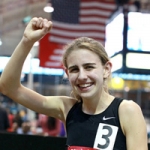 Yesterday, Brenda Martinez composed the tweet heard 'round the American women’s middle-distance running world: “After speaking it over with my coaches. Decided to compete in the 800 meters @USATrack Field nationals!”

Martinez had been viewed as one of the rising U.S. stars in the 1500 meter or metric Mile race, and her decision not to do that event at the USA Outdoor Championships later this month makes the path to qualifying for August's World Championships much easier for a handful of runners, including high school star Mary Cain (right, PhotoRun).

Besides the decision by Martinez, another key factor working in Cain’s favor is Jenny Simpson’s victory in the 1500 at the 2011 World Championships. Defending champions get automatic entry into their event at the Worlds so in the women's 1500, the United States gets to take four runners rather than the usual three.